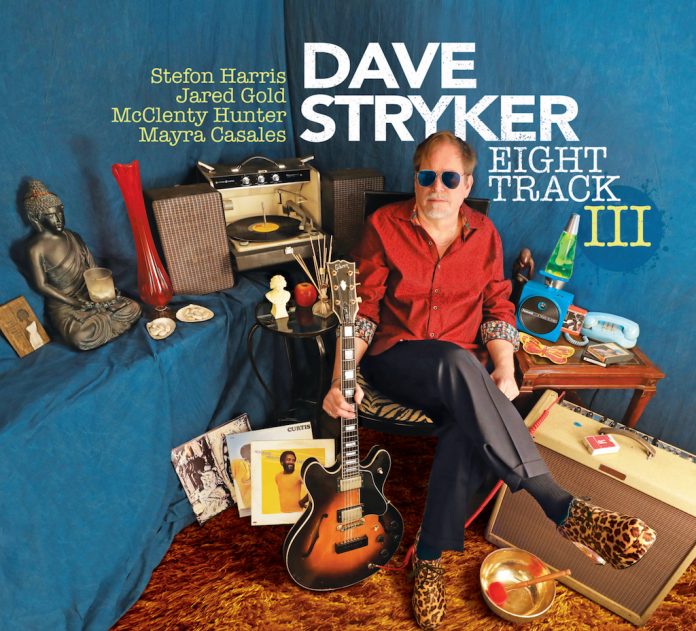 Dave Stryker is a 62-year-old American jazz guitarist who has recorded numerous albums as leader as well as being a sideman to quite a few big names. Stryker grew up in Omaha, Nebraska but moved to Los Angeles in 1978 where he later met organist Jack McDuff. After moving to New York, he toured with McDuff in 1984-5, then spent nearly a decade with saxophonist Stanley Turrentine.

Eight Track III (not surprisingly) follows two earlier releases of the same name. They are a collection of classic melodies from the 1970s and interpreted in a jazz style. The musical selection is eclectic, ranging from Steely Dan, Marvin Gaye, The Temptations through to Burt Bacharach and The Carpenters.

There is no doubting Stryker’s ability as a musician or that of his group. I particularly liked the vibraphone playing of Stefon Harris, which give the album a nicely retro feel in keeping with age of the music. This may not be to everyone’s taste and some may think it a little “cruise ship” or “cabaret” in style. But to my ears it was relaxed and fun. The interpretations are creative and the improvisations first class. This would be great music for a gathering of (jazz inclined) friends with a 1970s theme. Just add the prawn cocktail, black forest gateau and the Mateus Rosé!

Brian Morton - 21 May 2019
Title and instrumentation might reasonably lead you to expect a classical joint rather than a jazz programme, and to a degree that’s justified. Aslan opens with a lovely arrangement...

Jazz Journal - 25 December 2020
It is perhaps stating the obvious to say that for some time now McLean has been considerably more than a mere Parker copyist, and this record, made four years...