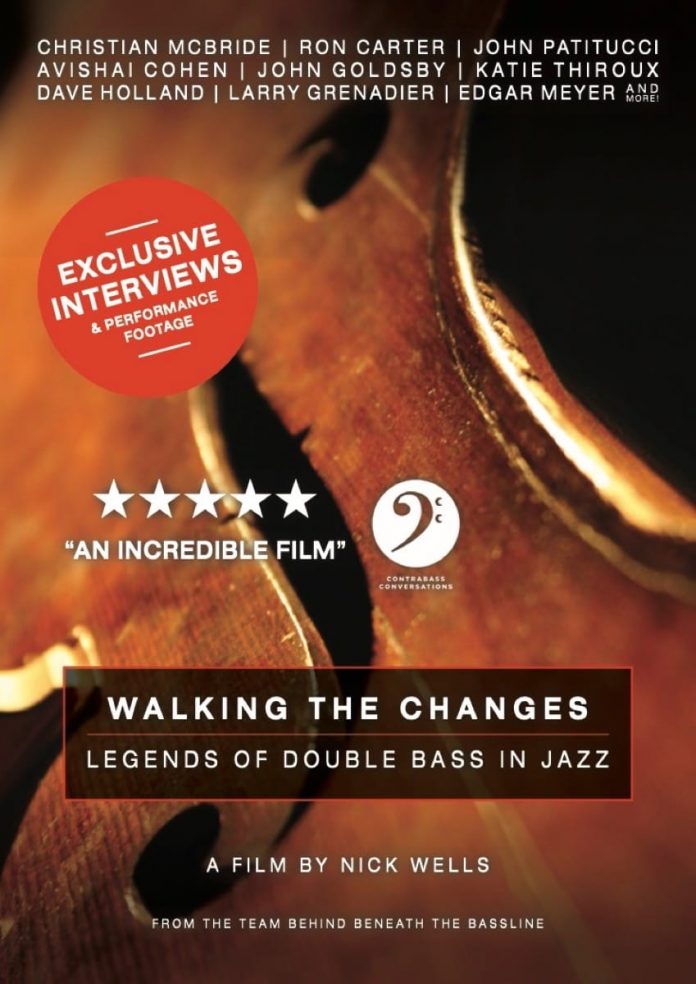 Ten high-profile jazz bassists, along with a few lesser-known names, are interviewed on camera in this 73-minute video. Included are performances of bass solos by some of the participants, all dedicated to great, innovative bass players from the past.

First up is Christian McBride, who tells of his early inspirations, Paul Chambers and Ron Carter. Chambers died young but Carter was everywhere on the scene for years as young McBride watched him, listened to him, tried to emulate the way he stood, how he played the instrument and what type of strings he used. It was all to no avail, as he found he did not sound remotely like Carter, only himself. It was a lesson learned and it is repeated by other bassists that you only ever sound like yourself. Five bassists all playing in the same way sound like five individuals, as someone remarks later.

McBride continued his search and study until he caught Ray Brown in live concert. “Ah,” he exclaimed, “that’s how it’s supposed to be done.” It was a moment of revelation for McBride but for others it was a two-edged sword. Red Mitchell found that every call to record he received in LA included phrases like “Just give us that Ray Brown walking sound” or “We called on Ray Brown, but he wasn’t available, so you were our next choice.” Mitchell promptly moved to Sweden to avoid the Vietnam war and Ray Brown.

John Goldsby gives credit to the early bass pioneers such as John Kirby, Bob Haggart and Israel Crosby, pointing out how important they all were but acknowledges that the transition to bebop on bass came from Jimmy Blanton and, particularly, Oscar Pettiford who played in bop style with Parker, Gillespie and all the early boppers and contributed standard bebop lines such as Tricotism and Bohemia After Dark. Later the contributions of Paul Chambers, Percy Heath, Ray Brown and others helped make bassists into soloists as well as accompanying rhythm section players.

Larry Grenadier plays a solo dedicated to Pettiford and his general bebop harmonic approach. The innovations of musicians like Charlie Haden, Scott LaFaro and Eddie Gomez are given due recognition for their contributions to the free scene and the general expansion of bass playing in 1960s jazz. One contributor describes Charlie Haden’s playing as in the tradition but having “a nebulous swing”. Phil Palombi plays his version of Scott LaFaro’s solo on Gloria’s Step, and much is made of the importance of the bassist’s work with Bill Evans on the Sunday At The Village Vanguard records from 1961. It is also reported that Ray Brown and LaFaro practised together, bass to bass, in 1959.

Mingus is praised by many bassists as being a “thorough player” and doing everything possible on the instrument. His influence is stated as key to many players, particularly William Parker and Barry Guy. There are contributions, verbal and musical from John Patitucci and Dave Holland, the latter claiming his originality on the instrument came directly from working with Miles Davis. Much is made of the advances in bass playing over the years, but it is sobering perhaps to consider the words of bassist and singer Katie Thiroux, who points out that it is still important to be able to play four notes straight, cleanly and with good time.

Walking The Changes: Legends Of The Double Bass In Jazz. A film by Nick Wells, DVD, Bass Media Ltd, walkingthechanges.com