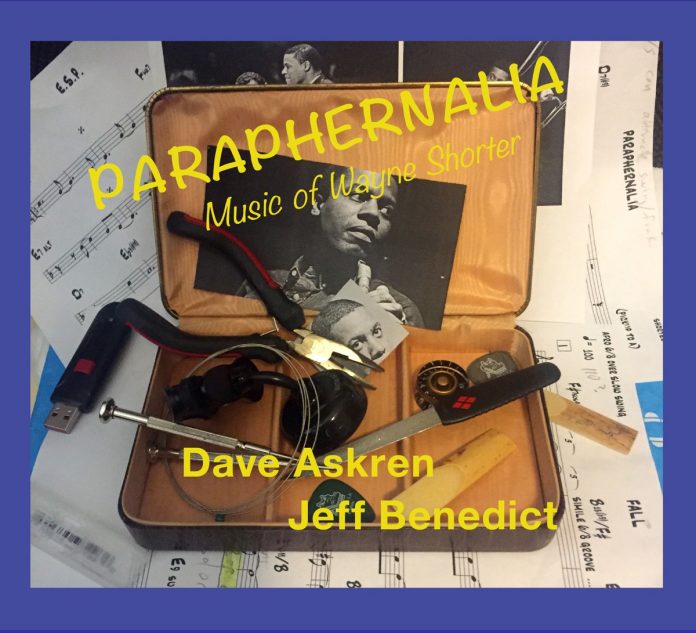 For their third album as co-leaders together, guitarist Dave Askren and saxophonist Jeff Benedict chose to celebrate the music of Wayne Shorter. Having arranged and played together for 25 years now, Askren and Benedict hope to pay homage to the man responsible for some of the most memorable music of the last 60 years.

However, Askren clarifies their intentions, saying “We didn’t want to just do covers of Wayne’s tunes. We didn’t try to sound like him, because you can’t do better than the original music. You can just do your own thing and make music your own way.”

Askren, having only switched from clarinet and saxophone to guitar at the age of 14, studied at Cal State LA, gaining a master’s degree in classical guitar, where he met Benedict who was teaching at the school as well as leading one of the jazz bands.

Benedict, having gained a Doctor of Musical Arts degree from the University of Texas at Austin, has performed with numerous top jazz artists as well as appearing with The Los Angeles Philharmonic, The Los Angeles Chamber Orchestra and many more. The two musicians have two other albums: their 2009 It’s All About the Groove followed by their 2017 Come Together.

The tracks E.S.P., Iris, Fall and Paraphernalia all pay tribute to the 60s Miles Davis group, the first two coming from Davis’s album E.S.P., from which the first track takes its name. Askren and Benedict’s E.S.P. gives us a swinging, blues-based start featuring percussion solos from Chris Garcia. Showcasing the ballads of Shorter, Askren and Benedict include the tracks Miyako and Infant Eyes, for which Askren switches to a nylon-string acoustic guitar, giving both tracks beautiful and lyrical textural qualities, with hints of the Mediterranean.

The vast scope of moods that Askren and Benedict are able to capture is astounding, and this facility allows them to take the music of Wayne Shorter somewhere new and very exciting.

Find out more about Dave Askren and Jeff Benedict: Paraphernalia (Music Of Wayne Shorter) at daveaskren.com

This album seems as though it’s very much centred around the singer Kristin Berardi (although the voice actually features on around only half of...

Selected Jazz Journal writers reflect on the jazz scene in 2020

Press photographer Geoff Ellis's recollections of jazz in the West Country include lamenting the poor turnouts for Earl Hines and Willie “The Lion” Smith...

Here are some of the very best items that the Quintet of the Hot Club ever recorded. The accent is very much on swing,...