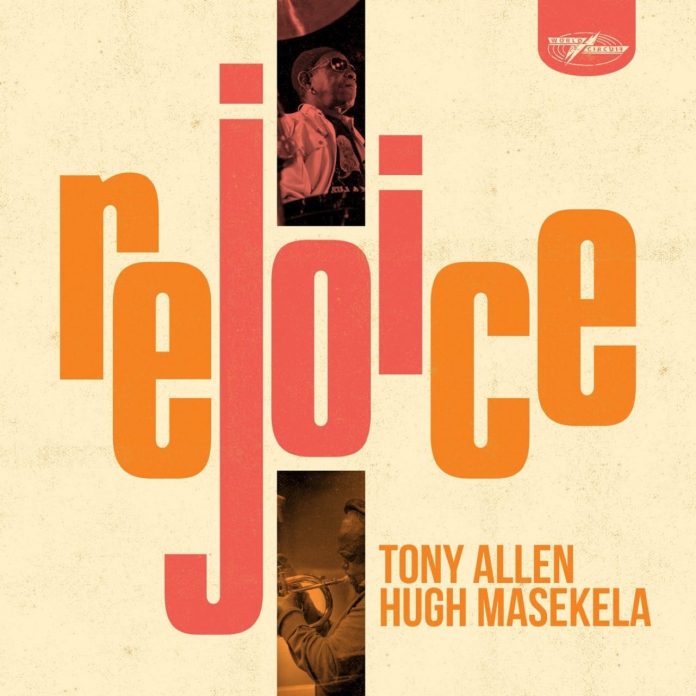 Ten years in the making, Rejoice was worth the wait. It’s a celebratory, groove-laden, thoughtful, danceable, collection from two of the great figures in music (not just jazz or Afrobeat), ably supported by some younger generation players from the UK.

Every one of this album’s eight tracks sparkles with life, with even the cautionary Robbers, Thugs And Muggers (O’Galajani) bursting with good vibes. The press release promised live performances to accompany the album’s release, but sadly only one or two took place before Allen’s death on 30 April 2020.

Masekela predeceased Allen, dying in 2018 before the finishing touches were put to this album. He and Allen laid down the original tracks in London during 2010, but busy international careers meant that the pair never made it back into a studio to finish off the album.

However, Allen and producer Nick Gold returned to the same studio in 2019 and brought together a band of additional musicians to complete the album. Allen refers to the resulting music as “a kind of South African-Nigerian swing-jazz stew”. The nine-year gap doesn’t show: the overdubbed contributions meld seamlessly with the original tracks.

Masekela and Allen are the stars here, without a doubt, but the supporting artists are worthy of their roles. Bassists Tom Herbert and Mutale Chashi both have a warm, rich, swing that complements Allen’s upbeat grooves (ably assisted by percussionist Lekan Babalola). Steve Williamson makes a telling contribution to Agbada Bougou, opening the tune in unison with Masekela then taking his own solo over bass and drums. Jabulani (Rejoice, Here Comes Tony) is a celebration of the drummer which includes an appearance from vibraphonist Lewis Wright.

Masekela adds vocals to three tracks, including Jabulani (Rejoice, Here Comes Tony), while Allen contributes brief vocals to one – the medium-tempo We’ve Landed, which he dedicated to modern-day teenagers finding their way in the world. It’s their instrumental prowess that really hits home, though, Allen and Masekela sounding as strong as ever on these positive, hopeful, tracks.

Barry Witherden - 07 January 2021
Douglas describes this as “a new suite of compositions for our moment. I conceived of these pieces as music you could have in your headphones when you attend Climate...

Jazz Journal - 27 January 2022
Gil Evans goes on proving the same old wonderful thing over and over again. That he is the brightest orchestral talent in jazz. That he can get more out...