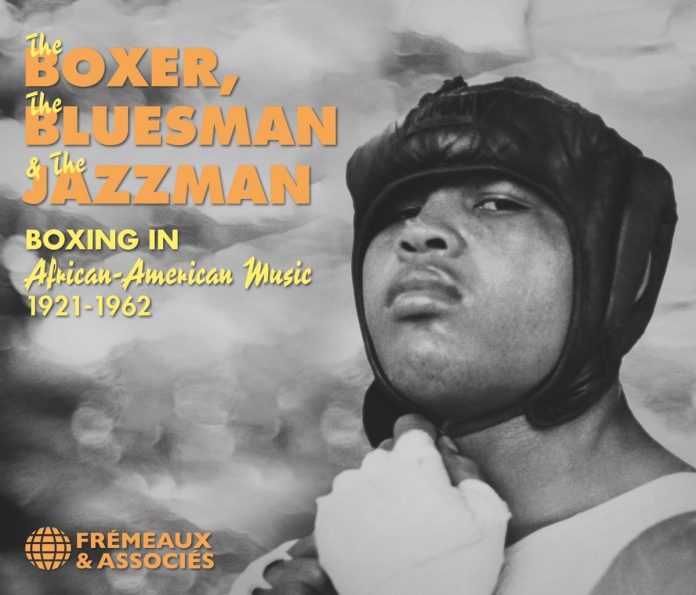 Just as I thought my book (here’s a shameless plug for Jazz & Cricket – An Unlikely Combination, see review, April 2021) collared the niche market, along comes this unusual double album, a compilation drawing strong links between boxing and African-American music.

The tracks range from early blues to R&B / rock & roll, but include Jelly Roll Morton’s Strokin’ Away (1930) – amongst his many claims, Morton at one point was a fight promoter in Washington – and a few modern jazz numbers. Eminent boxers are mentioned, in particular Joe Louis (by Memphis Minnie, Cab Calloway, Paul Robeson with Count Basie’s band and others), whose co-ownership of the Rhumboogie Club gave the opportunity for T-Bone Walker to appear regularly and to record for the house label. Sonny Boy Williamson also sings of Louis and his fight for the world heavyweight title with John Henry Lewis in 1939.

Jersey Joe Walcott, another world heavyweight champion, is heard on the mercifully short Say A Little Prayer, with Marie Knight, whilst Sugar Ray Robinson makes a much better fist of Knock Him Down Whiskey, accompanied by Earl Hines’ band. Robinson is referenced by Baby Boy Warren and Sonny Boy Williamson on Baby Boy Blues and on Sugar Ray by the trio of Roy Haynes, Phineas Newborn and Paul Chambers. Surprisingly, Babs Gonzales’ 1952 recording of Sugar Ray is not included.

An odd bit of information regards the inclusion of Ezz-thetic, by Lee Konitz and Miles Davis. Its composer, George Russell, named it after boxer Ezzard Charles, whom he knew in Cincinnati.

The second disc has its emphasis on musicians who actually took part in the sport, some better known than others. Bluesmen Bukka White and Otis Spann both had periods in the ring, and Willie Dixon worked briefly as Joe Louis’s sparring partner. Champion Jack Dupree, however, was the most successful, encouraged by Louis, and fought over a hundred bouts in the 30s. Here he’s heard on Sporting Life Blues, recorded for Storyville in 1962.

There are a number of tracks sitting in the R&B / rock & roll / doo-wop corner, and there’s a raunchy tenor by Harold Battiste on Messed Around by Lee Dorsey (formerly boxer Kid Chocolate), but the set closes with three modern jazz titles: the former army boxing team member Kenny Dorham contributes Lotus Blossom (from Quiet Kenny, New Jazz, 1959); ex-welterweight Red Garland, who once fought Sugar Ray Robinson, plays Crazy Rhythm, from the Prestige album It’s A Blue World; vibist Johnny Lytle performs The Moor Man, from his 1962 Jazzland album Moon Child. Like many of those mentioned, Lytle was a Golden Gloves champion, the competition covering several levels of boxing in the USA.

An interesting and informative booklet is included and it’s surprising the number of well-known figures who combined the two. No doubt a follow-up release would include Miles Davis’s Jack Johnson recording – see, it was more prevalent than you might think.

John Adcock - 25 May 2020
Environmental, social and political concerns frame the music on this, Pukl’s third album for Whirlwind. This is a very personal take on contemporary western society, with the title of...