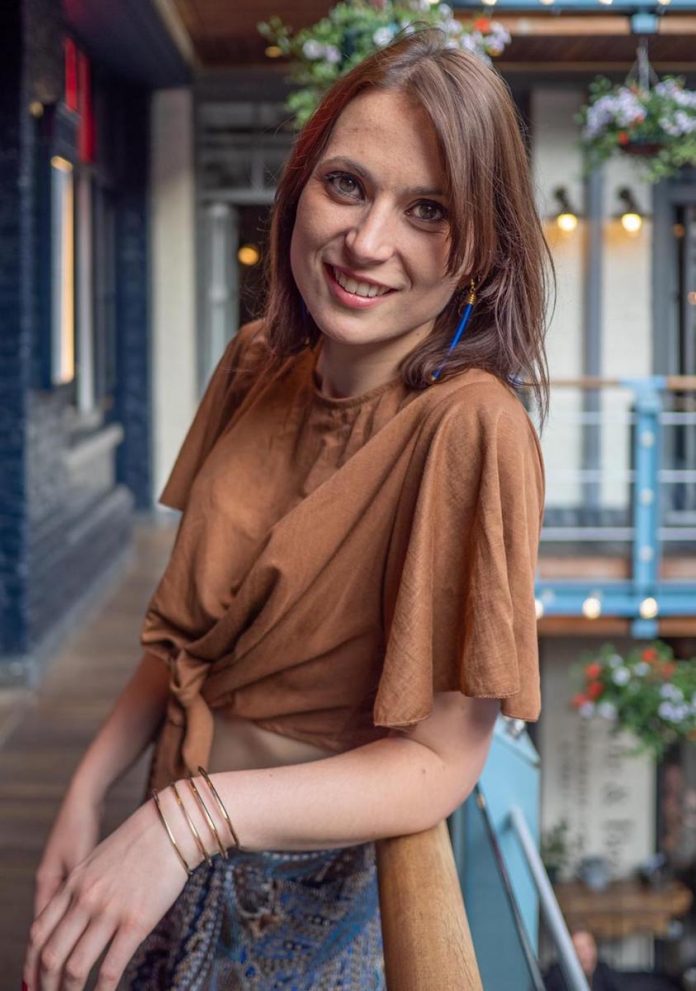 London-based singer-songwriter and harp player Noemi Nuti’s 2015 debut album, Nice To Meet You, was widely acclaimed. Strangely, however, it has taken her five years to follow it up, with the recently released Venus Eye. “On Nice To Meet You I gave everything I had and I felt very drained after it and needed to replenish”, she explains. “I needed to nurture my ears and musicianship. I needed time to know what I wanted to say on the next album. I wasn’t just going to release another album for the sake of it so I waited.”

Nuti believes her approach paid off. “This album is more honest, it’s more me and there are themes and subjects on it that are particularly close to me.”

Indeed, those themes and subjects are somewhat alluded to by the CD’s title. “The album is about the female perspective and the most archetypal figure of the feminine is Venus the goddess”, says Nuti, who was born in New York to Italian parents and who spent most of her childhood in Italy.

The wittily bleak Uberwench is about the pressures on modern women, the title suggested by her life-partner, pianist Andrew McCormack. “The philosopher Nietzsche talks about the ubermensch, the superman. The idea was to become more of yourself”, she says. “And Andrew said, ‘You should write a song about an uberwench, an uberwoman”, so that got me thinking. Because often the idea of becoming more of yourself as a woman is you have to be the perfect mother, the perfect lover, the perfect employee…”

Women jazz performers are perhaps expected to be groomed and glamorous whereas no one is bothered if their male counterparts slouch on stage in crumpled T-shirts and jeans. I suggest that female performers being judged by their appearance in a way that men aren’t is another of the many pressures on women. Nuti demurs. “That’s not my experience. I feel I need to make an effort [with my appearance] in order to give the best of myself. It’s like a ritual, like some people go silent for 10 minutes before performing. And it’s important to convey a message of quality at all times because if you don’t care about how you look why would anybody listen to anything you’ve got to say.”

On Beautiful Life Nuti vividly conveys the feeling of being consumed by love and not wanting her beloved to depart. “It’s a spin-off of a Brazilian tune [Elizete Cardoso’s Jobim/Vinicius-composed] Vida Bela about a woman longing for her loved one, a fisherman. She doesn’t like that he goes off to sea, early in the morning. My partner tours internationally and leaves me in the middle of the night to go to the airport so Beautiful Life is a more modern version of Vida Bela!”

The lovely Italian Lullaby is indeed a lullaby sung in Italian. I wonder if perhaps Nuti has a baby herself for whom she wrote the song. “I’m very maternal but, no, I haven’t been lucky enough to have a child yet. Italian Lullaby is a co-write with Andrew McCormack and this sweet lullaby just came out and then the lyrics came in Italian, about my sister. It’s a reminder for her to listen to what her instincts are telling her.”

Andrew McCormack also co-produced the album with Nuti. “When you’re recording you rarely have the whole picture of what’s going on musically and I was upstairs, [not] in the main room with the band. So it’s hard to say when it’s the right take but he was there to guide me and stop me falling into the trap of doing take after take. So he’s there as a bit of a policeman. But a nice one!” laughs Nuti.

As a singer-songwriter Nuti has been compared to Joni Mitchell. “I find her deeply inspiring”, she enthuses. “What I’m always trying to achieve when I write a song is that kind of everyday truth that she’s able to convey somehow very directly although she uses, especially later in her career, complicated images.”

The album also includes two covers, a great swinging interpretation of Tori Amos’s Cornflake Girl and Billy Joel’s She’s Always A Woman. “Cornflake Girl is one of my favourite songs from when I was a teenager. This album is about the female perspective and Tori Amos is just a very fierce, feminine artist and I find her fierceness very refreshing and powerful.”

Nuti scats exhilaratingly on the track. “I don’t figure out what to do in advance because I don’t want to lose the freshness”, she says of her scatting. “It really is in the moment and that solo was one full take.”

Given the album’s focus on exploring the female perspective the inclusion of a Billy Joel standard is perhaps surprising. “I wanted a song written by a man expressing an opinion on what a woman can be like. But I made sure they were lyrics I agreed with! He talks about women having the ability to be manipulative and cunning and difficult to understand and the complexity of women and I certainly relate to that.”

Nuti’s core band, Chris Eldred (piano), Tom Herbert (double bass) and Emiliano Caroselli (drums) plus guest Gareth Lockrane (flutes), all play impeccably on the album. “I tend to let them do what they do. Sometimes I give them reference tracks of grooves that inspired me or ideas of space or dynamics but I try and leave them enough space for them to shine through.”

Nuti’s promotion of Venus Eye has been undermined by the Covid-19 lockdown. “One can feel sorry for oneself and I’ve been quite moody at certain moments but I’m trying to count my blessings: I’m surviving, I’ve got time to work on things and I’m clearing out a lot of deadwood personally and musically. So maybe it’s not a moment to worry but a moment to bounce into action!”

The Nicolai Majland Trio’s 10-track Welcome is a pleasure to listen to and one not to be missed. It demonstrates high levels of talent...

A widely admired and respected jazz and studio musician, trombonist Slyde Hyde played on many recording dates backing the biggest names in jazz and...

This summer sees the series of cricket matches known as The Ashes played between England and Australia and it reminded me of one day...