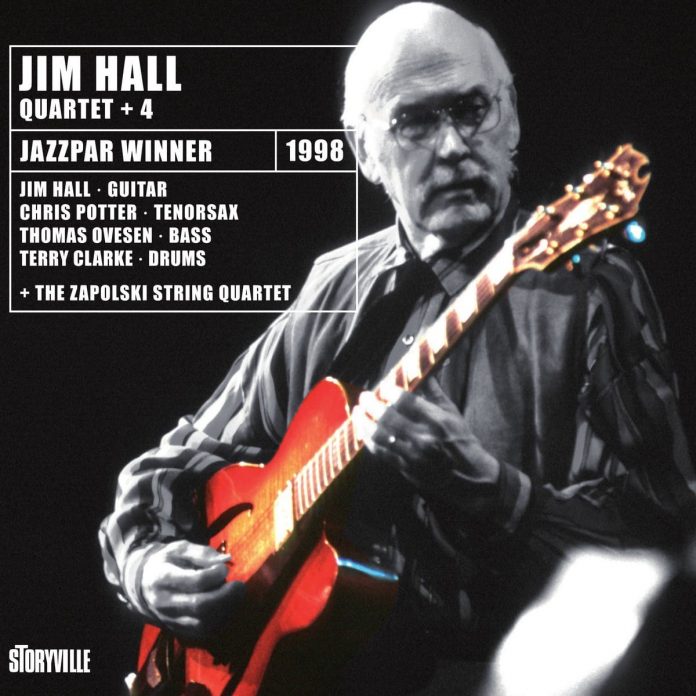 It’s not too much of a hyperbolic stretch to contend that Jim Hall was and still is regarded by many as the jazz guitarist’s guitarist. Certainly he influenced many of today’s major players including Pat Metheny, Bill Frisell and John Scofield. His recording career began in the mid-1950s, notably with Chico Hamilton’s group, when he appeared on the drummer’s earliest albums including the first, Chico Hamilton Quintet Featuring Buddy Collette (Pacific Jazz, 1956). He later made significant contributions to Jimmy Giuffre’s drummer-less trio including The Jimmy Giuffre 3 (Atlantic, 1957). So from the start, Hall was immersed in chamber jazz, third stream and identified as one of the main exponents of cool jazz.

Fast forward four decades and these influences re-emerge in this remastered album of the concert that celebrated Hall winning the Danish Jazzpar prize, which may sound parochial but is actually regarded as the jazz equivalent of the Oscars. The winners are asked to perform a recital with their chosen accompanists of whom some must be local players. Hall chose his regular drummer Terry Clarke and saxophonist Chris Potter. But he also recruited the Denmark-based Zapolski string quartet led by Alexander Zapolski.

Three of the seven tracks on this album feature the quartet. Thesis is one example of Hall’s neo-classical compositions involving strings. He had already featured in John Lewis’ strings-augmented Jazz Abstractions (Atlantic, 1960) which must have had an enduring effect on him although he’d had a taste of this with the Chico Hamilton group’s unconventional line-up including Fred Katz on cello.

Another quartet piece on this live Jazzpar recording is Quartet+4 which Hall composed especially for the concert. Thesis and Quartet+4 are equally immersive and complex. The quartet takes centre stage almost throughout the former with Hall only adding some meditative guitar interludes, whereas on the latter Potter’s tenor solo is standout and Hall’s contribution is far more energetic. Zapolski’s arrangement of Purple Haze is astounding in its subtlety. Wryly idiosyncratic, it completely transforms that quintessential psychedelic rock song into something hauntingly ethereal. Potter supplies an appropriately frenetic solo followed by Hall who finishes his solo by detuning a lower string on his guitar with dramatic effect.

The four numbers excluding the quartet – three standards and one Hall original (Mr. Blues, an enticingly off-kilter tune) – portray Hall at his most inventively skilful, a true master of his instrument. The encore, Duke Ellington’s In A Sentimental Mood, with Hall and Potter gracefully duetting, is simply sublime.

Derek Ansell - 06 December 2020
Puzzling a while ago about why all the rather good singers in Fresh Sound's Voices Time Forgot series disappeared from view, I put it down to the rise and...