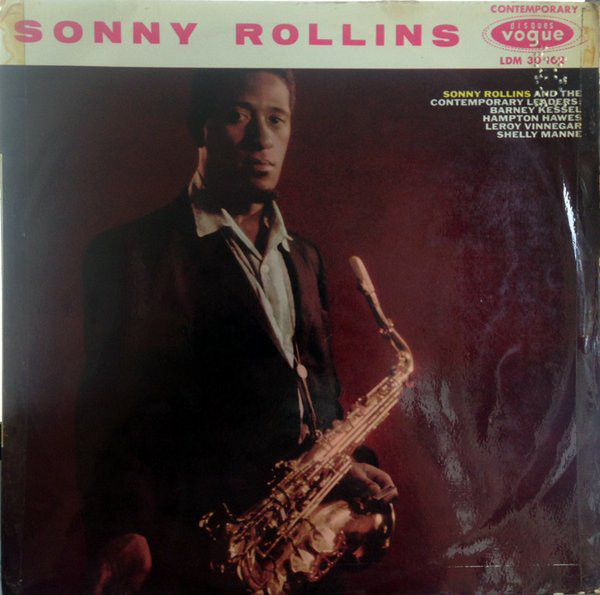 This is not the very strongest of Rollins. Indeed, by a purist it might be considered a compromise session. For that reason it is much more intel­ligible than many of his records, and much lighter hearted… Sonny Rollins is a very great saxophonist – one of the few who are genuinely figures of influence. His general form is to play hard and unremitting modern jazz in the company of other musicians who are equally serious. All agonisers together, in fact.

Music from the West Coast is easier and freer, less serious in result if not in intention, and for that reason easier to take and to understand. The effect of this West Coast company on Rollins was to produce an easier session, and one much more good humoured than usual. It has done nothing to abate his integrity, nor to quiet his enormous invention and range. But I think it has opened his work to many more people, and as an introduction to his work it cannot be bettered.

Shelly Manne is the leading drummer today because he is not bemused by technicality and because he does not use his drums as an independent solo instrument. Leroy Vinnegar is a swinger, a wonderful bass player, but always jaunty, unlike the better and much more serious Mingus or Cham­bers. Hampton Hawes is a very adapt­able musician (witness his work with Jimmy Witherspoon) and I seriously doubt if a guitarist is ever a dominant figure in any major group. These facts taken together account for the nature of this band, and perhaps for the effect on Rollins. There is one error in the sleevenote. Rollins had recorded with guitar before, in July of the same year, when Rene Thomas was featured on the “Big Brass” session.

I would suggest that Rollins was given his free ticket to anywhere after that completely unaccompanied “Body And Soul” of July 1958 (MGM C776) – so far as one can judge from records. He chose to take it easy on this Contem­porary session, made three months later, but it is the free-wheeling of a master. A man of this stature likes to sail as close to the wind as he can. In tracks 1, 2, 3, 5 and 7 he defies every possibility – in effect saying “So there’s nothing new to do with it?” with two of them, and “Who said it was corny?” with the rest.

Highspots? The whole thing is magnificent, but you notice some funny touches. The well-placed honks, like Lockjaw Davis, in “Every Little Star”. All the business on a single note in “I’ve Found A New Baby”. The fact that a jazzman can play “Chapel In The Moonlight” and not only get away with it but make it into something. Play this record for pleasure. The kicks come later.
Graham Boatfield

Sophie Prior - 24 May 2021
With her elegant and warm, yet also strong and articulated vocals, Estonian singer Susanna Aleksandra adds an album full of originality and creativity to the jazz-pop song catalogue. The Siren...