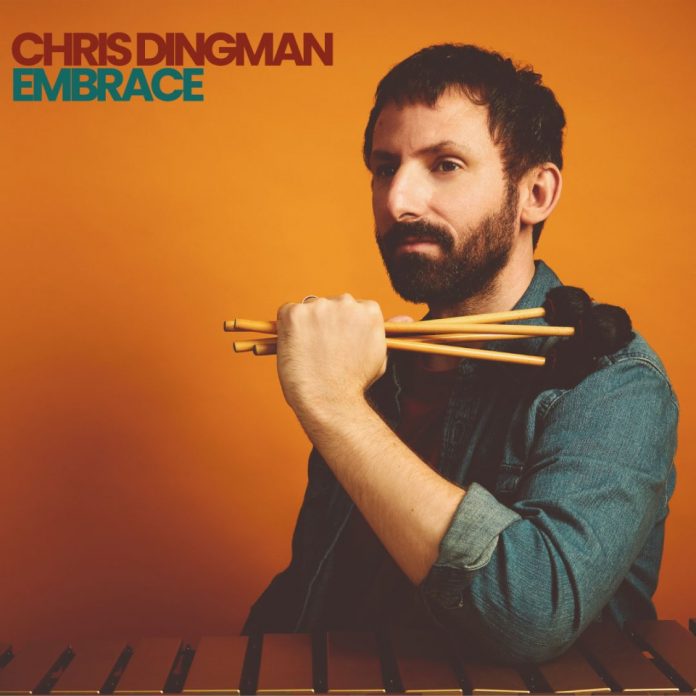 As he admits, Chris Dingman has an ideal name: “It’s perfect”, he says. “I had no idea I’d become a vibraphonist”. He studied at Wesleyan University and the Thelonious Monk Institute, then moved to New York, where he’s collaborated with such as Anthony Braxton, Steve Lehman and Tyshawn Sorey. Embrace features his superb trio with bassist Linda May Han Oh – whom I know for her excellent work supporting Lee Konitz among others – and drummer Tim Keiper.

It’s a beautifully warm ensemble sound, and the publicity cites influences from West African traditions and South Indian music, which Dingman has studied – his facility with asymmetric rhythms is apparent also in his work with Steve Lehman. As he explained in an interview, he likes the sustain pedal, but “you want to hear the melodic line”. He adds, by email, that this involves stopping undesirable notes by damping with the mallets: “Gary Burton used this technique ferociously and at speeds that nobody else has come close to. I use it a fair amount too. Sometimes, I blur the line on purpose … I [was] influenced much more by Bobby Hutcherson. But I’ve also tried to incorporate some of [Burton’s techniques]”.

Forgive/Embrace is based on a kora-inspired line that came from studies of Toumani Diabate, while Goddess and Folly Of Progress are inspired by vocalist Oumou Sangare; Ali is dedicated to Ali Farka Touré. The luminous Mudita means sympathetic joy in Pali, a South Asian liturgical language. But they all sound flowing and natural, which is a testament to the musicians’ skill. Steps On The Path is unusual, a study in entropy that stumbles to a conclusion. As much as non-Western influences, however, I’m struck by echoes of Gary Burton’s very open, blues/country feel, particularly on tracks like Hijinks and Wizardry and Folly Of Progress – though it’s true that vibraphone isn’t so common as an instrument, and Burton is a dominant influence on it. Vibraphone-led trios aren’t common, and this is an outstanding realisation of the format.

Chris Dingman: Embrace is available on Bandcamp and in various digital forms

Thomas Fletcher - 03 September 2019
Commonly known for supporting artists such as Natalie Cole, George Clinton and Randy Brecker, London-born but Brooklyn-based Aaron Whitby has released his debut album as a bandleader, Cousin From...