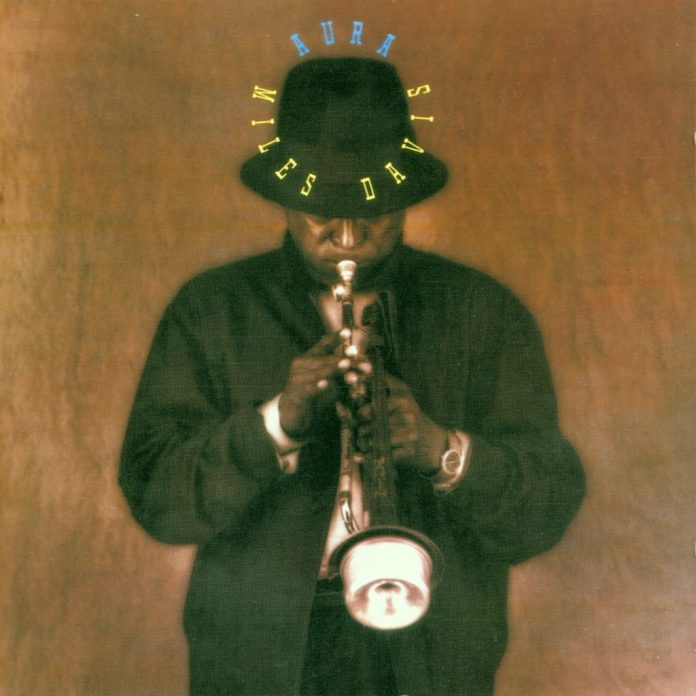 Miles and a Big Band? Sketches of Denmark? An unreleased masterpiece designed to restore Miles’ flagging reputation? Well, yes, no and not likely is the answer, the important question here being to ask aura, what aura?

The background to this set is that in 1984, Miles Davis received the Sonning Music Prize, a Dan­ish prize previously awarded to the likes of Messiaen, Stravinsky et al. While in Copenhagen the following year to receive the award, he guested on this work of homage, written for him by trum­peter Palle Mikkelborg. Each of the tracks implies a colour Mikkelborg has heard in Miles’ work over the years, the aura of the ti­tle being the image projected by Miles much as saints are said to sprout haloes.

The saint in question here is undoubtedly Mikkelborg, who has put considerable thought into constructing and then orchestrat­ing each piece. The mix of acous­tic and electronic is handled well, in particular the contrast of rich trombone with fluid synthesizer, and the band is adept at negotiat­ing the many twists and turns of the varied score. But it must be said that uncritical adulation rarely produces critically fine re­sults, especially if the work is de­signed for a star soloist who re­fuses to shine. Miles being Miles, merely flickers, stretching him­self for the occasional twinkle with a one-off star-burst to keep us starwatchers happy. Recorded at much the same time as You’re Under Arrest, Miles treats some of his solos as warm-ups for that set, quoting liberally from Time After Time and Human Nature while playing each of his solos in a uniformly relaxed, dare I say lightweight, manner. That is unfair to his rhythmically fine outing on Blue or his crescendo of fire on Red, but in comparison with NHOP and particularly Thomas Clausen, who makes the most of his chance on Indigo, Miles doesn’t appear to be stretching himself much.

I hesitate to mutter about new imperial wardrobes, but in this case Palle Mikkelborg could have turned in a stunner by wearing the boss’s cap himself.
Simon Adams

Bruce Crowther - 27 November 2020
A Swedish singer, Lina Nyberg is also a composer of works in classical music and jazz. In the classical form, she has composed for string quartet and symphony orchestra,...