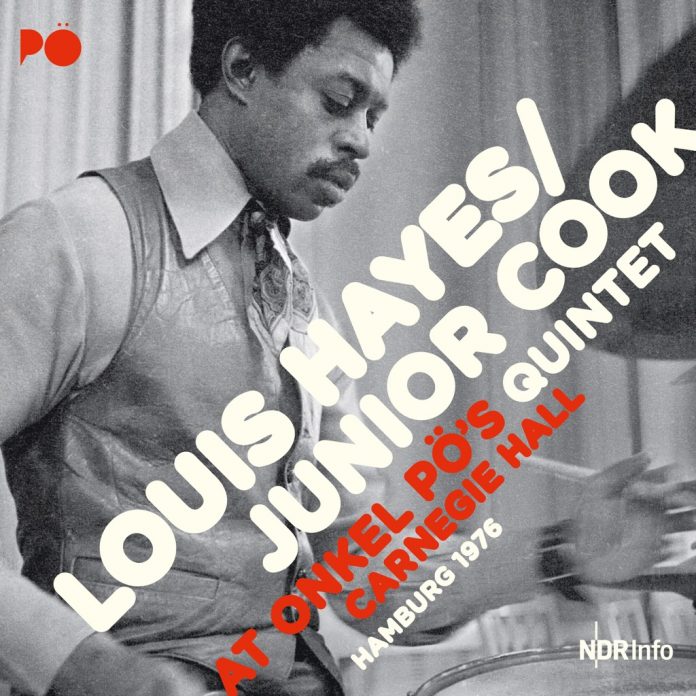 Horace Silver was one of many leading American jazz musicians to appear at Onkel Pö, the celebrated Hamburg venue that closed in the late 1980s. Many thought the documentary film about it screened at the city’s movie festival three years ago would be the only permanent record of the place and its importance, apart from a book by Holger Jass, who ran things from 1979 until its demise.

Recordings were made there, however, including this one. Others in the Onkel Pö series are due to appear from the city’s public broadcasting station Norddeutscher Rundfunk (NDR).

Silver and Art Blakey as both employers and musical influences represent the ties that bind members of the Louis Hayes-Junior Cook Quintet, recorded at Onkel Pö – known familiarly as Onkel Pö’s Carnegie Hall – in 1976. Hayes was the nominal leader and Cook 10 years the senior of his frontline partner, the trumpeter Woody Shaw. Hayes, Shaw, and Cook had been members of the Horace Silver band. Hayes, pianist Ronnie Matthews and bassist Stafford James were former Jazz Messengers.

Despite these forebears, the main impact was environmental. Jass recalls that Onkel Pö evenings ended whenever it was decided to call last orders, and when musicians were playing as though there were no stopping them. Hence, this double CD.

Considering what’s happened since in jazz, not least a more responsive attitude to the virtues of ensemble and comparative quietude, exposure to these often roaring-furnace displays of dexterity now inspire awe and tedium in a ratio of about 80 percent to 20. When fatigue sets in, the music echoes across the decades as something completely achieved, and repeated today at a musician’s peril.

But for that 80 percent Cook is the master, always sounding as though he could go on towards infinity and giving his in-flight refuelling stops an air of expectancy that Shaw, despite his self-elevating intensity, doesn’t quite match. Together, though, as in the swop choruses that end All The Things You Are and the harnessed opening of Shaw’s Moontrane, the two are a pair.

Cook’s unaccompanied coda to When Sunny Gets Blue and his co-ownership with Matthews of Pannonica are choice, and the contributions of Matthews and James in matching and sustaining the hornmen make it a fivesome of equals. Matthews’s Ichi-Ban is a sweaty, test-to-destruction exercise in hard bop. Hayes is his usual nuanced, Blakey-like self and James’s bass a booming and unflagging direction-marker.

Nigel Jarrett - 21 July 2021
Sixty-two years on from Ornette Coleman's startling album The Shape Of Jazz To Come, the shape of things in Miguel Zenón's tribute is Coleman played with more virtuosic relish....