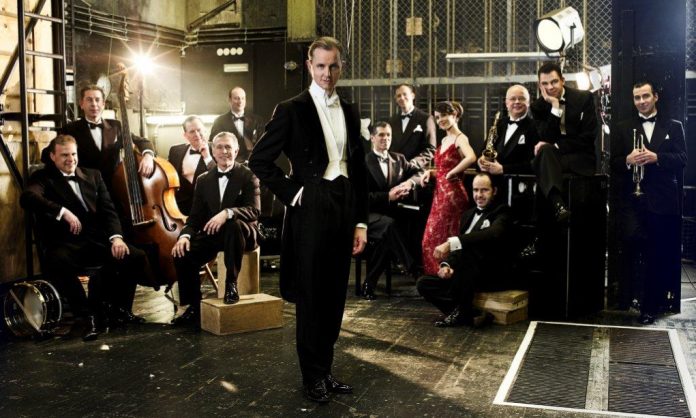 On 5 February I was one of several journalists who gathered at the Wigmore Hall to spend 40 minutes in the company of Max Raabe as he promoted the show he has now brought to the UK. Accompanied on that occasion by only a pianist, Herr Raabe was here supplemented by the 12-piece Palast Orchester from which he is normally inseparable. This is, in fact, the opening concert of only four he will perform in the UK, the others being Birmingham, Manchester, and London’s Cadogan Hall tomorrow.

Raabe and the Palast Orchester have devoted their entire careers to replicating the popular music of the 1920s and 30s and such was the powerful air of nostalgia emanating from the Congress Theatre as I approached that I half expected to bump into Sandy Powell, who made his home in Eastbourne and his living in the Hippodromes and Empires of the nation.

The 1,600-seat theatre was about half full, more than respectable for an unknown quantity on a Tuesday night in March. About eight of the 12 musicians were multi-instrumentalists with both the guitarist and the trombonist doubling on violin. There was also a sousaphone and a bass saxophone whilst the drummer also featured a zylophone as opposed to vibes, tubular bells, gong and blocks. To me the ensemble looked like what I imagine the bands of Henry Hall and/or Carroll Gibbons must have looked like when they were broadcasting from the Savoy hotel in the 1920s.

The repertoire was roughly 60/40 English and German and Herr Raabe proved to be as competent at whistling as crooning and displayed a droll line in repartee which was savoured by the audience. In each case the band employs the original arrangements and it’s refreshing to hear, for example, Singing In The Rain as it was heard in 1929, light years away from Gene Kelly’s 1952 interpretation and it was clear that the audience relished not only the standards – Cheek To Cheek, I Won’t Dance, Just One Of Those Things – but also the rarities – Love Thy Neighbour, Just A Gigolo, Sweet And Lovely. Altogether the evening was an unqualified success with the audience bringing them back not just for one but two encores.

Roger Farbey - 09 March 2021
New York-based guitarist and composer Justin Rothberg leads his quintet for the third record under his name and the follow-up to Old Business (CD Baby, 2015). A City College...