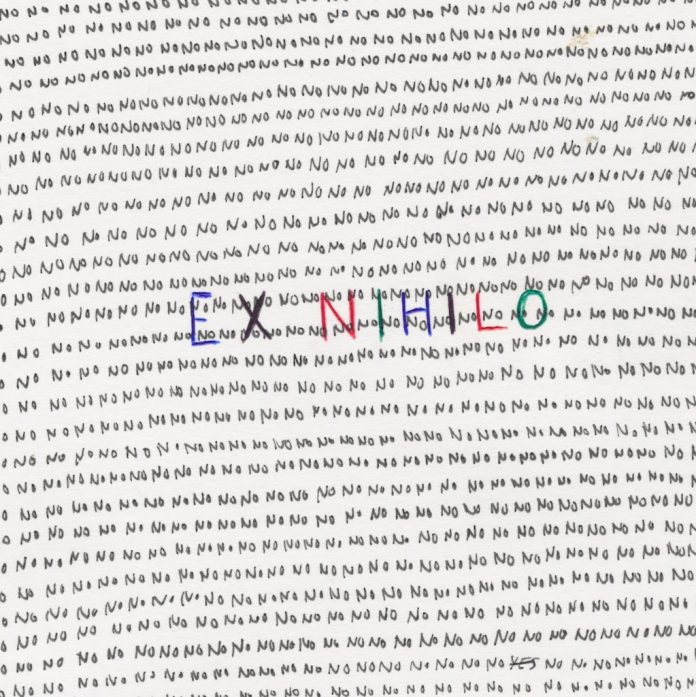 A (very) distant memory of the torture of studying O-level Latin was not quite enough for me to unlock the Latin titles of this live duo session of free improvisation from London’s Vortex club.

But with a little help from Jon R. Stone’s useful Latin For The Illiterati the following approximations suggested themselves: Out Of Nothing, Eternal Farewell, As I Am Now So You Shall Be, Matching Of Mind And Reality, Standing For Something Else, Nothing Better/Summit Of Perfection.

I’m happy to receive any and all criticism here, provided someone can tell me: what exactly is the point of giving Latin titles to an album of free improvisation recorded in London in spring 2018?

No timings were given to the tracks so the summary information below is approximate. Another minor beef is that while the packaging graphics are sharp and fine, the album came with no inner protective sleeve. The music, on vinyl, soon acquired thereby some extra atmospherics courtesy of assembled dust particles.

And, vibrant enough as it is, the session itself raises the old question about recordings of free improvisation, i.e., are we experiencing a documentation of a real-time event that inevitably loses something in translation, as it were, or are we to take the music in and for itself as it comes out of the speakers?

Whatever: justifiably, Golding and Galvin have burgeoning reputations on the British free scene (with saxophonist Golding well known for his work with drummer Moses Boyd).

This is their first recording together and they evince an empathy as uncanny as it can be captivating as they mix stabbing staccato accents and diversely textured, richly imaginative sounds in an astutely wrought blend of clipped power and dynamic finesse.

You sense that while both players are bursting with ideas, they have the creative maturity to allow time to live in their phrasing – exemplified in most distinctive manner in Proprium, with its mix of an extensive repeated soprano motif and variegated piano colour courtesy of both regular and dampened strings, and the patiently unfolding largesse of Ultra, with Golding on tenor.

While much of the music cannot help but recall decades of previous British free improvisation, with – to these ears, at least  –  the spirit of Evan Parker much in the air, it was the spacious and welcome lyricism of this concluding piece which persuaded me that the potentiality of something a touch special to come is signalled.

Nigel Jarrett - 31 May 2019
Italo-American guitarist Michael Felberbaum seems to be so aware of the advantages and dangers of working without bass and drums that his 3 Elements trio sounds phenomenally self-sufficient and...