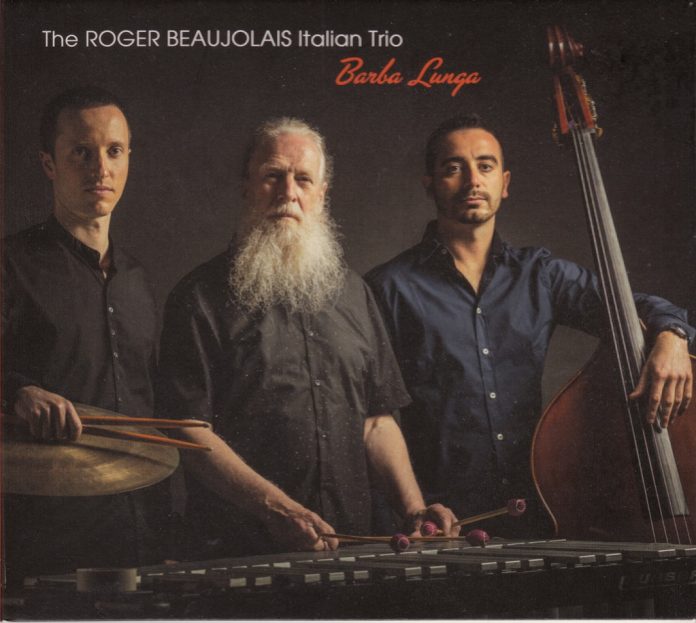 Vibraphonist Roger Beaujolais has been on the British music scene for a good while – getting on for 40 years – and his musicianship has graced the work of artists including Robert Plant, Morrissey, Guy Chambers and Roni Size.

Barba Lunga is Beaujolais’s 20th studio album in this lengthy career, but his first in a trio format. The trio in question is his Italian Trio, with bassist Giacomo Dominici and drummer Alessandro Pivi joining in. It’s already an experienced combo: the three musicians have played together for a decade, with Beaujolais a frequent visitor to Rimini (the album was recorded in nearby Pesaro, the birthplace of Rossini, which is known as the City of Music). The experience shines through on Barba Lunga.

Pivi opens proceedings with a punchy introduction to Granita For Anita. It’s an exciting way to begin a consistently enjoyable album. Pivi keeps up the dynamic percussion once Beaujolais and Dominici (on electric bass) join in, the driving bass and drums a contrast to the bright warmth of the vibes.

Barba Lunga starts out as a gentler, slower, tune with a pleasing melody before the tempo rises for Beaujolais’s solo. The title is Italian for “long beard” – a tribute, no doubt, to the vibraphonist’s own impressive facial hair which he sports on the front cover.

Jimi Hendrix’s The Wind Cries Mary has found its way into a few jazz musicians’ repertoires, notably Jamie Cullum’s. The Italian Trio’s version is exceptional in its laidback, graceful, approach. Dominici plays the melody on double bass, as vibes and drums add colour and atmosphere.

Lost For Words is another gentle tune: a romantic number suited to intimate, late-night listening. The mood on Barba Lunga is generally more upbeat and uptempo than these two tunes, however. Freeman and Lawrence’s Faith and Beaujolais’s Mr Non PC and Benign Tonight (he does have a great line in titles) are especially bright and cheering, a pleasant diversion from the gale force winds battering my house as I write.