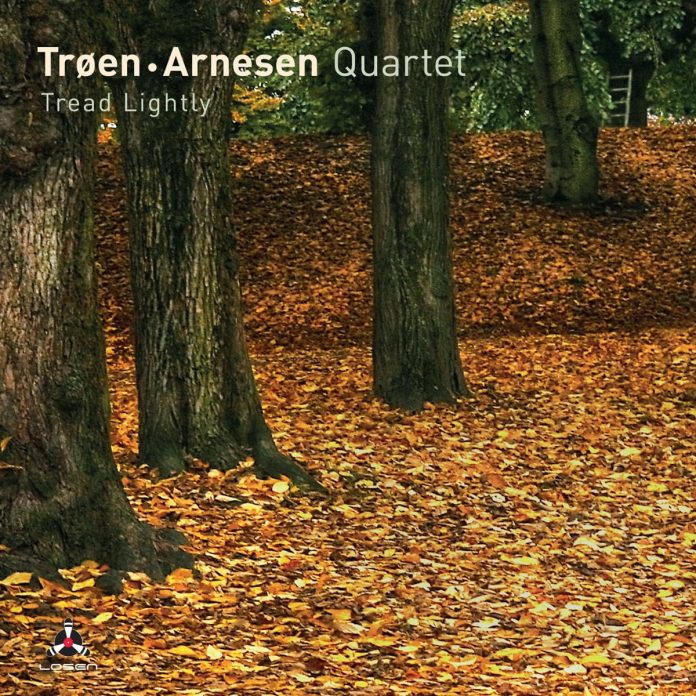 Joining Arnesen is up-and-coming sax player and flautist Elizabeth Lid Trøen who bagged a bachelor’s degree in Performing Music from Norway’s University of Science and Technology, after which she has worked professionally with the Bergen Big Band (with Arnesen), Hatch and her own quartet. She is about to release her first album with her Trondheim-based sextet BounceAlarm.

Recorded at Bergen’s Duper Studio, the album’s 10 tracks comprise eight Arnesen originals and two by Trøen. The opening Flirt sees Steinkopf providing plenty of cymbal action as piano and saxophone squabble with a mix of smoothness and discord before each takes a turn.

Trøen’s Partysvensken starts on a jauntier, more structured footing as a prelude to a fusion of experimental quacking and squeaking sax sounds and alternately dreamy and intimidating piano. Frenetic drums return the piece to a more traditional format for the close.

Just Thinking, with its slow alluring melody, is a complete departure from the previous tunes, a luxurious combination of lilting flute and light piano runs, while Sarah’s Bounce returns to the upbeat opening pattern of Partysvensken and the now-familiar fencing between Arnesen and Trøen.

Feline Dreams is another plaintive number, melancholy piano passages again giving way to some lovely flute work and bouncy bass plucking from Sandberg, the latter also being heard to advantage on the aptly named Armadillo Dance, which features more keyboard/saxophone interaction towards the end.

The remaining titles continue in these veins, with the album coming to a close with the somewhat saturnine Denne, whose reflective piano parts once again engage in a dream-like dance with melancholy saxophone sounds.

Tread Lightly is appropriately titled, taking a gentle approach to its music, even on its many improvisational compositions, which echo everything from jazz and folk influences to classical music and movie soundtracks. The improv parts are appealing without being an assault on the senses like some, although they can be a tad repetitive, but they are pleasantly and skilfully presented within a tight quartet format that sees the musicians working well together.

Trøen is certainly a star in the making and it will be interesting to see how her career develops.

A quality release of all-original and well-crafted music from a new Norwegian quartet, the joint leaders of which bridge the generations with graceful ease. Born in 1950, Arnesen has a considerable reputation in his native land: he won the prestigious Buddy Prize in 2009. His compatriot, the melodically and rhythmically assured saxophonist and flautist Elisabeth Lid Trøen, was born in Voss in 1992: sample her spacious breadth of tone and clarity of melodic phrase on tenor on the elegantly sprung title track, a piece which can bring to mind the lyricism of Keith Jarrett’s Belonging quartet.

Arnesen’s CV includes work with some of the stellar figures of Norwegian jazz, such as saxophonist and flautist Knut Riisnæs. His fine touch and consistently melodic and rhythmically fluid approach to piano trio jazz can be enjoyed especially on various releases from the past decade and a half: these include Arnesen’s three folk-rinsed but freshly cast and often strongly swinging Norwegian Song albums, the first two of which were cut with Terje Gewelt (b) and Pål Thowsen (d) while the third featured upcoming Norwegian bassist Ellen Andrea Wang (born 1986) and Palle Mikkelborg (t, flh, beat-box).

Bassist Ole Marius Sandberg was with Andersen on the genre-melding Grieg, Tveitt and I from 2015 as well as the 2016 The Pentagon Tapes – enjoy his lovely pizzicato outings here on Feline Dreams, Interlid and Denne – while new drummer Sigurd Steinkopf fits in as to the manner born (check his astutely built solo on I Remember This).

As Erik Steinskog details in an insightful sleevenote, here is an album distinguished by subtly disposed and developed shifts in melodic motif and pulse, rhythmic, chordal and linear interaction, and overall dynamics. Finger-clicking energy – sample the rocking ostinato figures of Flirt, the shape-shifting Partysvensken and Just Thinking or the potent development of Trøen’s tenor solos on Sarah’s Bounce and I Remember This – is complemented by a refreshing quality of lyrical reflection, epitomised by the flute-led Feline Dreams and Interlid as well as what Steinskog rightly calls the “almost nocturnal” ethos of the concluding and beautiful Denne.

Fred Grand - 06 July 2020
Like bassist and producer Petter Eldh, Otis Sandsjö (b. 1987) is a Swedish ex-pat domiciled in Berlin. He shares Eldh’s passion for jazz, hip-hop and contemporary electronica, and the...

Jazz Journal - 24 November 2020
It is a pity that Miss Connor ever heard Sarah Vaughan, for she has neither the voice control nor the imagi­nation to copy her effectively. For that matter I...