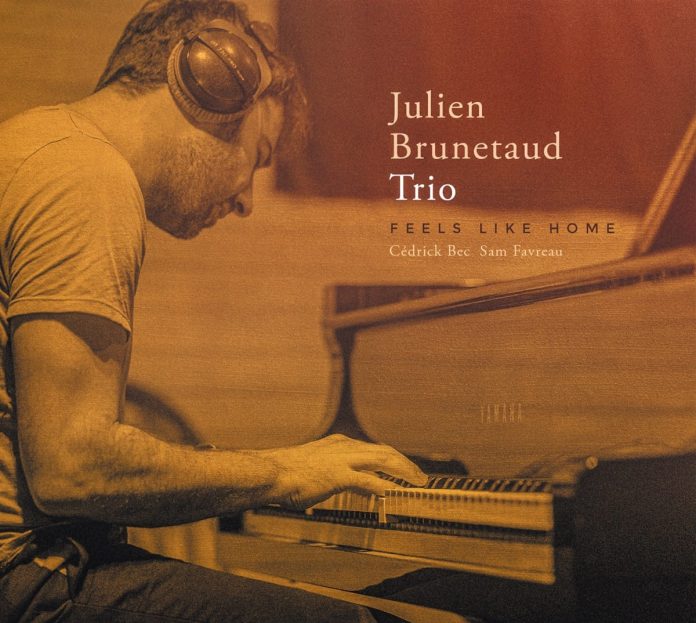 Two interesting points arise from this album by Marseille pianist Julien Brunetaud: a jazz musician’s original charts are often called “songs” but are nearly always songs without words until someone writes them, often with ham fists; and many of those originals deserve wider currency.

Only one track here is not a Brunetaud composition, and that’s the Beatles’s Let It Be. On an album whose polished constructions and finish are sound, the tune is set up by a light rock beat in the kind of Latin-bluesy-funk mode adopted elsewhere. A novel treatment, but the idiomatic tone of resignation calls for little change in the way Paul McCartney sang it; the instrumental “song” moves best at the pace of its original verbal progression.

Peace is a stroller, with a light and sure touch at the keyboard. So is the eponymous opener, Feels Like Home, with its simple groovy theme and reined-in improvisation. Ditto the second track, Sael, again Latin tinged. By this time, the listener may be looking for something more scorching. Red’s Point is not incandescent but it’s a welcome shift in tempo and has a more feverish head that might be expected to invite chorus-chasing by the pianist. No chance: there’s an early solo by the tasteful bassist Sam Favreau followed by piano exchanges with vigilant drummer Cédrick Bec, before some divergence in theme statement – but no serious exposition – from Brunetaud.

Nola is worth taking up by others. It has a long-awaited beeline passage for the leader that glances at Sweet Georgia Brown but also some double bunch-of-fives funkiness. Le Grand Bleu’s poignancy has a subverted rocking motion, rococo keyboard flourishes, and a pile of intensifying chords. The stride-like Trinidad’s Delight offers witty touches and the chiming, Tyner-inspired McCoy’s Blues sports a Garrison-type solo and cymbal-splashing that recalls Elvin Jones.

The flame here is constant if ultra-safe and the playing allows one to breathe without taking one’s breath away.

Michael Tucker - 01 July 2020
Born in Stockholm in 1970, Daniel Bingert is the son of the legendary Uruguayan-born but long Stockholm-domiciled saxophonist and flautist Hector Bingert, whose associates have included Nat King Cole,...