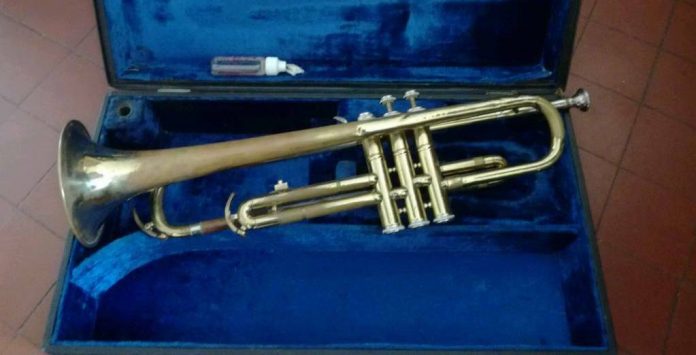 There are few sounds in jazz so majestic as the quavering rattle of a typical and carefully calculated out of tune trumpet lead. To get the ideal “bad” pitch which is a prerequisite of this historic style, the young trumpeter must choose his instrument with care. In doing this it is advisable to consult an expert, a bearded player perhaps, who will be able to advise you where the junk shop which sells suitably clapped-out horns is located.

When choosing your instrument (if they have more than one in stock) always go for a green one. It will not be painted this colour but will have matured into it (in the same way that Stradivarius violins mature) as it has lost its deceptive shiny plating. A slightly flattened bell may also be useful (although this condition can be achieved by a well administered boot) since it makes it easier to apply the tin hat and old beans tin which are essential to your stock of mutes.

Playing the instrument is pretty simple and becomes complex only when one reaches out to emulate such highly skilled eccentrics as Bunk Johnson and Natty Dominique. The beginner is advised to copy the more simple stylists like Miles Davis and Joe Newman who play heart on sleeve stuff with no attempt at the subtle multi-split notes and variable pitching of Messrs. Johnson and Dominique.

First of all let us weigh the inherent advantages out of which the great traditional players were able to make such capital. Essentially, they were all old men when they were at their peak and most of them affected badly fitting false teeth. A lot of the time they were either pretty sick or just plain drunk. If you are suffering from the handicap of being under age (sixty or under) do not worry too much, for there are many ways of beating this rap. Perhaps the best way is to get under a cold shower fully dressed and then go out and lie in the gutter all night. This procedure should be repeated nightly for a week, preferably during the last half of January or the first half of February. At the end of your week you will either be half way to a Mutt Carey vibrato or you will be past caring anyway.

A more serious handicap is the possession of one’s own teeth. This is bad for they are bound to hamper the embouchure which is naturally formed by pressing the trumpet mouthpiece into raw and preferably bleeding gums. Let us assume that you are prepared to make the small sacrifice of your teeth (who needs teeth to eat whisky anyway? Ha ha). The commercial way of doing this is to get your dentist to remove them under anaesthetic. But, bearing in mind that one day you may wish to have your biography written, it is more spectacular to get a friend to club you in the mouth with the business end of a baseball bat. You will be surprised how readily your friends will agree to help.

In the same way that there is much to be said for the school of thought which holds that all drummers are morons, there is a deal of truth in the theory that banjo playing causes slackening of the jaw muscles

There is only one non-wind instrument which can out-shout the trumpet. The banjo is an instrument which enslaves its perpetrator and is by far the most demanding of all the voices in an orchestra — consequently much hard thought is advisable before deciding to devote one’s life to this jazz juggernaut. You must be prepared to be one apart from the rest of your band. Not for you the off-night caused by the trumpet player being too in tune or the drummer thumping too loud. Your off-nights depend entirely on yourself, for, apart from their own playing, banjo players hear nothing except other banjo players. They plough on indiscriminately with a bland ignorance of such obstacles as breaks or passages of stop-time which may be placed in their way. They are impervious to changes of tempo except by visual observation of the hand-clapping of the scrubbers in the front row of the audience.

Drummers share a similar philosophy and, in the same way that there is much to be said for the school of thought which holds that all drummers are morons, there is a deal of truth in the theory that banjo playing causes slackening of the jaw muscles. Certainly most banjo operators work with their lower jaw hanging loosely about three inches below their upper lip. This affliction is particularly noticeable in my home town of Liverpool, where a permanently open mouth is essential for breathing – the nose being reserved entirely for the production of the filigree conversational sounds for which the city is so renowned.

More sensitive members of your ensemble may find it difficult to sustain the onslaught of two or three hours of unrelenting banjo at the place nearest the microphone from whence you have carefully shouldered the clarinettist. In this case they are liable to make you the band vocalist in the hope that you will lay down your banjo while you are singing. It is wise to make a point of invariably disappointing them in this respect. It is quite possible to sing even such commercial songs as The Nearness Of You or Tenderly to a rousing banjo accompaniment – in fact it makes it easier for the audience to join in the chorus.

However, don’t be too ambitious in the vocal department. Remember your vocation. It is more important to sing vocally unmanageable songs (because they suit the instrument) than it is to sing something simple which doesn’t permit full rein being given to the pungent chop-chop of your banjo.

A final word on the banjo. For some reason there is a campaign against the instrument (something like Moral Rearmament) which is being run by certain writers who should know better. Most of them cannot play instruments and their comments are thus rendered doubly invidious.

Do not let anything qualify your devotion to your instrument. Every chunk from it is another phrase in that wonderful language which you have made your own and, whatever anyone says, remember that the banjo is an art form. Be worthy of it. In times of stress – well, there won’t be any, for the outer skin of a banjoist is as thick as is the leather pouch that encloses his brain.

This piece was written for Jazz News, where it appeared in 1962. Times were different then, and I have let the original essay be. Thus, those who care about such things will not find this essay to be, er, woke. See Blow By Blow, part 1

Derek Ansell - 09 May 2019
Originally issued as two separate LPs these have been combined into a double vinyl release by Speakers Corner Records. The music captured is from a CTI short tour of...