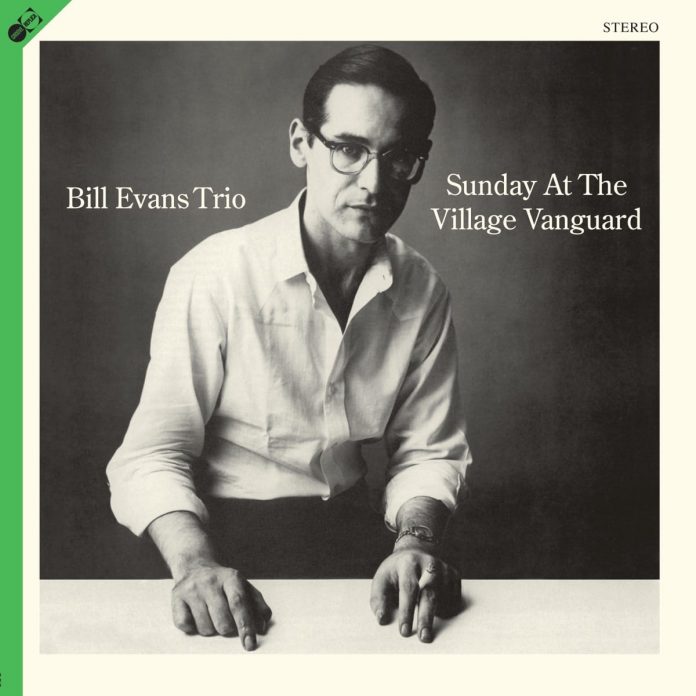 On a summer Sunday in 1961 the matinee and evening spots at New York’s Village Vanguard were recorded live to make the album reissued here. Bill Evans’s trio with bassist Scott LaFaro and drummer Paul Motian were not the headliners – they’d been booked as a supporting act to Lambert, Hendricks and Ross. Yet these sessions have since been considered by many as the yardstick against which subsequent piano trio jazz is compared.

This particular Evans trio is widely regarded as his best due to their synergistic interplay. Evans’s concept was to free up individual roles so that each musician was participating equally. Accordingly, we hear LaFaro often assuming the melody and dueting with Evans rather than accompanying and playing the odd solo as bass players had done previously. However, to carry this out LaFaro plays a lot in the upper register entailing at times a whining effect and in excess this can become somewhat taxing in its persistence.

Tragically, this recording was the last occasion when the trio performed together. Ten days later LaFaro was killed when his car veered off the road into a tree. Evans was so distraught by the loss that he became increasingly withdrawn. He didn’t play for several months and was seen wandering around New York wearing some of LaFaro’s clothes.

In selecting the six tracks for the subsequent LP, Evans felt impelled as a lament for his friend to select those that highlighted LaFaro’s contribution. Two of them, Gloria’s Step and Jade Visions, were written by LaFaro himself and the other four strongly featured his soloing. It seems as well that the sound of his bass was enhanced in the mixing process.

The tapes afforded enough material to release an additional album, Waltz For Debby, the following year. In 2005, Riverside reissued all the pieces they’d recorded that Sunday together with alternate takes in a three-CD box set, The Complete Village Vanguard Recordings, 1961.

The Groove Replica CD reviewed here also has the takes that didn’t make the original LP but to be honest, whilst these are of good quality they remain second best to those chosen for the original release.

The final track of the CD comprises 25 seconds of humorous silent-movie chase music that Evans quickly improvised to fill out the tape at the end of the evening.

Dave Jones - 29 January 2019
There’s some great playing all round on this excellent bass-led album, particularly by the leader, who’s an agile bassist and strong soloist, with a great sound, whether walking or...