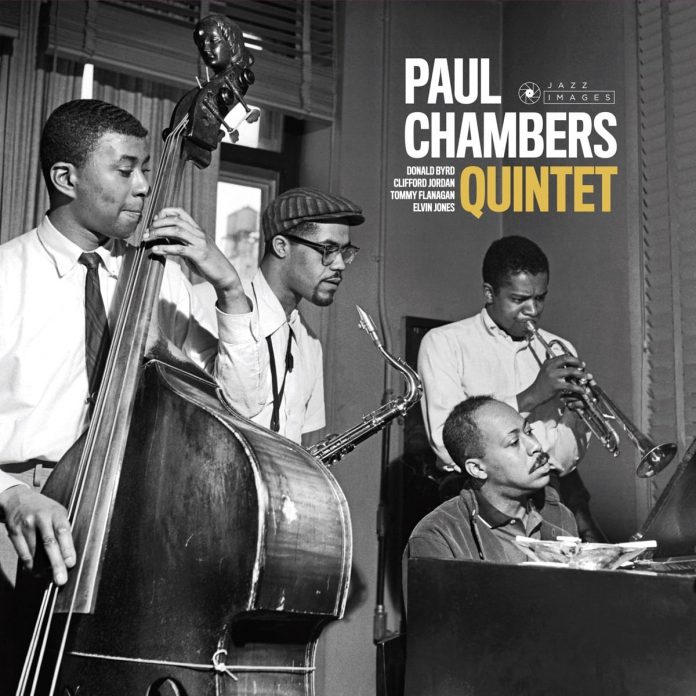 This was the second of three albums Chambers recorded for Blue Note as a leader. The first, Whims Of Chambers was a sextet with John Coltrane and his running mate in the Miles Davis Quintet of the time, Philly Joe Jones. Here he drops down to quintet size and features the up-and-coming tenor man Clifford Jordan along with Donald Byrd, who was also on the first LP.

Philly Joe, most likely not being available for this gig he chose Elvin Jones, at the time just beginning to make a name for himself. Tommy Flanagan had worked with Chambers frequently up to this point and was, anyway, an ideal choice on piano.

This session rises above the usual hard-bop blowing date standard by virtue of the bright, enthusiastic playing of all and two original compositions written for this date by Benny Golson, then and now one of the best composers in jazz. His chart Minor Run Down is first up and features sturdy tenor in the then current Coltrane manner from Jordan, a well-thought-out brassy trumpet solo from Byrd and a typical pizzicato excursion from Chambers, demonstrating his big sound and hard swinging approach.

Softly, As In A Morning Sunrise is played by just the rhythm section and after the bass workout is mainly interaction between piano and bass, with Elvin’s brushes whisking them along. What’s New is played in an attractive medium-tempo groove, unlike the usual slow ballad treatment. Golson’s Four Strings has a sturdy arco bass feature. All selections are lively, swinging themes and all the musicians on the date solo frequently. Elvin plays with crisp, crackling fervour but he was much more restrained then than he was three years later with Coltrane.

The six tracks are augmented on this release by two quartet pieces from the Whims Of Chambers set, with Horace Silver, Kenny Burrell and Philly Joe well represented. The cover of this reissue is an attractive gate fold with six of Francis Wolff’s photos of the musicians. Sound is clean but lacks the bright definition of vinyl releases mastered from the original master tapes. A limited edition, it should be snapped up by any enthusiast that doesn’t possess the two original records.

Peter Gamble - 27 March 2020
Veteran bass player McClure came to notice in the 60s when a member of the popular Charles Lloyd Quartet with Keith Jarrett and Jack DeJohnette. For a short period...