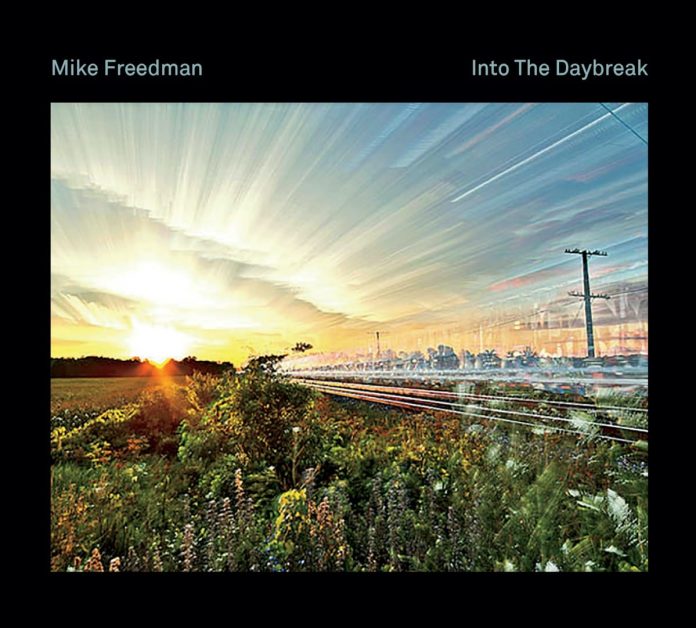 Over the past 30 years Canada-based guitarist and composer Mike Freedman has been recording and touring internationally with artists such as Tia Brazda, George Koller, Barbra Lica, Denielle Bassels, Steven Taetz and The Willows jazz trio. He has also released four albums as an instrumentalist and singer-songwriter: Mother Earth (1999), Postcards From The South (2001), Guitar Textures (2005) and The Heart Of The Night (2011). Into The Daybreak is his debut album as a bandleader.

The light Latin rhythm of Samba On The Sand, featuring Louis Simão on the curious-sounding cuíca (aka the Brazilian friction drum), sees prominent keyboards and melodica making space for playful guitar before returning for a punchy finish. Gale’s saxophone takes things right down with its languid introduction to Snake In The Grass, kicking off in a sultry film noir mood, then sequeing into a frenetic piano solo that gives Bowie’s Aladdin Sane a run for its money, and playing out against Senitt’s insistent drum hits and cymbal clashes.

The title track starts dynamically, recalling the The Doors’ Touch Me, horns firing on all cylinders, then giving way to the now-familiar guitar-piano interplay, alternating fast-and-furious with mellower vibes and some glorious sax work. Tomorrow Is Yesterday sees Curtis Freeman replace Hass on bass, its smooth opening heralding a fussier, more upbeat approach in which Ledbetter’s cascading piano runs dominate. Finally, the lovely closer Resolve is a slow-paced soul lullaby, recalling Stevie Wonder, Joe Sample/Randy Crawford and the Beatles’ Something. This and May The 4th are the album’s two jewels.

The nine self-penned tunes here, while often derivative of other works, are nevertheless pleasing jazz offerings flawlessly delivered, with controlled but outstanding improv kept to brief, manageable pockets. The rapport between Freedman and Ledbetter is superb, as is all the horn work, and the rhythm section keeps the whole thing on the level while maintaining a distinctive profile. Sweet.

Nic Jones - 02 February 2019
On this one alto sax and piano interpret a batch of elderly compositions in a manner which while faultless hardly smacks of individuality. Baevsky is out of the Konitz...

Josie Falbo: You Must Believe In Spring