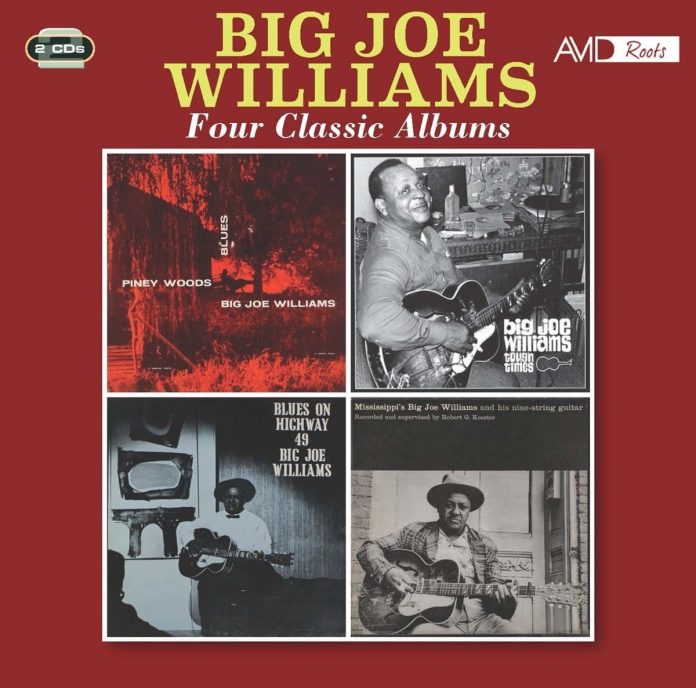 Big Joe Williams is not the biggest name in the history of the blues but he is an important name. He bridges the period from the early delta blues to the blues/folk revival of the 1960s. He was a mentor in the early 30s to Muddy Waters and in the early 60s to Bob Dylan. He was said to have married St. Louis blues singer, Bessie Mae Smith, whom he sometimes credited with writing his best known song Baby, Please Don’t Go, subsequently popularised by Van Morrison and Them in 1964.

Joseph Lee Williams was born in Oktibbeha County, Mississippi in 1903. As a young man, Williams started his musical journey busking and playing wherever he could get an audience. He worked in revues, minstrel shows and jug bands. In 1935 he signed to Bluebird Records and stayed with them for over a decade, recording his best-known songs Baby Please Don’t Go (1935) and Crawlin’ King Snake (1941). He recorded with Sonny Boy Williamson and travelled extensively through the deep south with the young Muddy Waters.

Williams was fortunate to survive the lean times as he then enjoyed renewed popularity among folk blues fans in the late 50s and early 60s. He became a regular at American folk festivals and toured both Europe and Japan, who couldn’t get enough of the genuine article. It was during this time that Williams came to know the young Bob Dylan and encouraged him to write his own material. Williams died at the age of 79 in 1982 in Macon, Mississippi and was inducted into the Blues Hall of Fame in 1992.

This four-album compilation features the albums Piney Woods Blues, Tough Times, Blues On Highway 49 and Mississippi Joe Williams And His Nine-String Guitar. The last title makes reference to Williams’s tendency to modify his guitars to carry nine strings. The sound was unique to Williams and it is said he did it to discourage other musicians from playing his guitar.

The quality of the recordings is good but not outstanding. Nonetheless they capture Williams’s powerful voice, ragged guitar riffs and driving intensity. Williams was, without question, the real deal. He remained largely unchanged throughout his career. Reviews would frequently make reference to his lacklustre appearance and shambolic instruments, but he was a survivor and an authentic link to delta blues. Thankfully, the original liner notes are included for each album.

This set is a good introduction to a blues singer who deserves greater recognition and would be a welcome addition to any developing collection.