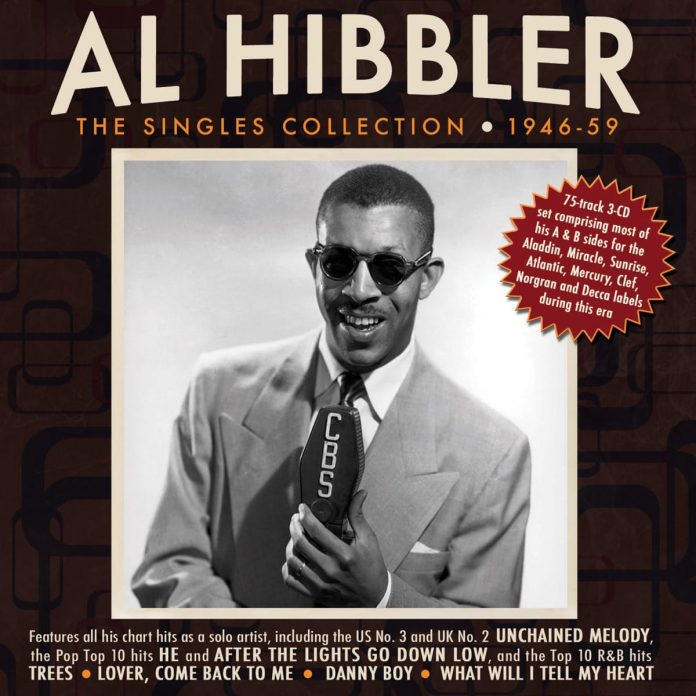 Very popular in the 1940s and 1950s, Al Hibbler worked in pop music, in early R&B and on the fringes of jazz. His commanding voice was heard briefly with Jay McShann’s band, with which he had his first record date, and then during a notable spell with Duke Ellington’s orchestra beginning in 1943 and continuing through the rest of the decade, although the singer also performed as a solo artist.

His ease with Ellington’s musicians is reflected through the accompanists heard on the first of these three CDs where the song choice is also reflective of Ellington. On the second CD, Ellingtonians are again present, as is the Count Basie band, on Sent For You Yesterday and Goin’ To Chicago (where he displays a stronger than usual blues inflection).

From midway through this disc, Hibbler is backed by the orchestras of either Leroy Lovett or Jack Pleis. Lovett brings in a few jazz sidemen, among them Joe Wilder, Taft Jordan and Hilton Jefferson. One of the songs recorded with Pleis, Unchained Melody, was a big hit for Hibbler, entering R&B and pop charts in the US and enjoying success in the UK. On CD3, Pleis and his orchestra are heard again, as are orchestras led by Neal Hefti and Sy Oliver, each on three tracks.

Hibbler’s voice, rich, fluid and warm, has a distinctive and usually wide vibrato, a vocal characteristic that can add emotional intensity to a singer’s interpretation of the story told by a song’s lyrics. Stylistically, Hibbler is not a jazz singer and he skirts only on the edges of R&B, yet he should appeal to many readers, especially on the first of these three CDs, where several of the Ellingtonians have solo moments. The first two CDs have the best songs, while, to be kind, some of those on the third CD are unmemorable.

Included in the box is a long, detailed and good account, by Paul Watts, of Hibbler’s career and the material performed, as well as full personnel details. This set is a reminder of Hibbler who, unfairly, seldom comes readily to mind when popular singers of the post-war era are considered.

Discography
CD1: I Got It Bad And That Ain’t Good; How Long Blues; S’posin’; Don’t Take Your Love From Me; I Surrender Dear; Solitude; My Little Brown Book; My Ev’a Lovin’ Baby; Summertime; Trees; Lover, Come Back To Me; Poor Butterfly; Hey Baby; By The River Sainte Marie; It Don’t Mean A Thing (If It Ain’t Got That Swing); What Will I Tell My Heart; I Love You; Danny Boy; Song Of The Wanderer; If I Knew You Were There; Nobody Knows The Trouble I’ve Seen; Stormy Weather; Cherry; Star Dust; Honeysuckle Rose; The Blues Came Falling Down (73.04)
CD2: Old Folks; Travelin’ Light; Now I Lay Me Down To Dream; This Is Always; Please; Believe It Beloved; Sent For You Yesterday (And Here You Come Today); Goin’ To Chicago; There Is No Greater Love; It Must Be True; As Time Goes By; I’m Getting Sentimental Over You; Anne; I Let A Song Go Out Of My Heart; I’m Just A Lucky So And So; Every Hour On The Hour; Flamingo; It Shouldn’t Happen To A Dream; Unchained Melody; Daybreak; You Say You’re Laughing At Me (While I’m Crying For You); I Can’t Put My Arms Around A Memory; Breeze (Blow My Baby Back To Me) (71.38)
CD3: Eleventh Hour Melody; Let’s Try Again; Never Turn Back; Away All Boats; After The Lights Go Down Low; I Was Telling Her About You; I’m Free; Trees; The Town Crier; Sweet Slumber; Because Of You; I Complain; Around The Corner From The Blues; When Will I Forget You; Be Fair; Wish; I’m Glad I’m Not Young Anymore; My Heart Tells Me; Ain’t Nothing Wrong With That Baby; Softly, My Love (Etude); Love Land; Love Me Long, Hold Me Close, Kiss Me Warm And Tender; Warm Heart, Cold Feet; Mine All Mine; What Tis? What Tis? Tis Spring (71.12)
Hibbler (v) with small groups and big bands led by Harry Carney, Tab Smith, Mercer Ellington, Billy Strayhorn, Billy Kyle, Johnny Hodges, Count Basie, Leroy Lovett, Jack Pleis, Sy Oliver, Neal Hefti, Billy Taylor and others. Personnel includes Shorty Baker, Russell Procope, Ray Nance, Ben Webster, Red Rodney, Benny Carter. Lawrence Brown, Joe Newman, Eddie “Lockjaw” Davis, Marshal Royal, Emmett Berry, Max Roach, Tyree Glenn. Locations include LA, NYC, Detroit, Chicago. 1946-1959.
Acrobat Music ACTRCD 9107