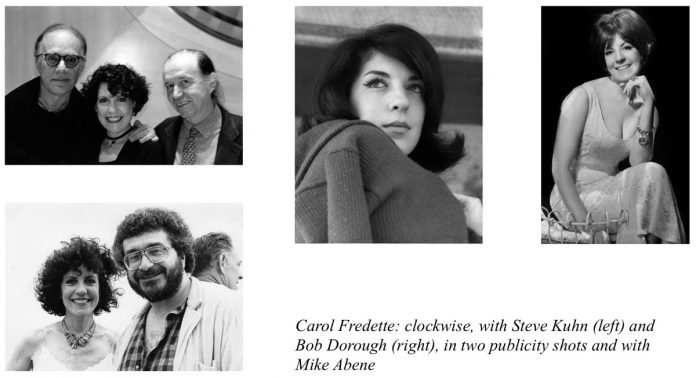 Although she did tour, including some travels overseas, Carol Fredette chose to work extensively in the New York area and this, allied to relatively few record albums, meant that she never received the wider attention she deserved. A gifted singer with a rich sound, she brought subtlety and skill to a wide repertoire.

She was born in The Bronx on 15 April 1940 and from a very early age was encouraged to study piano by her father, himself a keen amateur pianist. Although these early studies were in classical music, other family members directed her toward singing and in particular popular song and jazz.

After a brief spell at Florida State University, she dropped out and returned to New York where she sang with a band led by her uncle, trumpeter Marty Bell. During this time, she learned many standards and became determined on a career as a singer. Speaking of this time in an interview with Wendy Lane Bailey, when she received the 2015 Bistro Award, Fredette said: “My uncle Marty landed a gig in Union City, NJ at the Kit Kat Club. He asked me to come with him to his gig. He gave me a list of standards to learn in a week; by the time I went to his gig I had learned them all. He called me up to sing. I did a few tunes and the owner immediately hired me to sing for the summer with Uncle Marty’s band.”

Soon after this, and now in her late teenage years, she was sufficiently adept to embark on a professional career and soon thereafter sang with big bands including those led by Larry Elgart and Neal Hefti. Her occasional trips abroad included visits to Europe and South America. In the latter case, she attracted favourable attention through her love for and ease with the music of Brazil.

From the 1980s onwards, Fredette worked mostly in New York clubs, such as Fat Tuesdays, Iridium, Smalls, Birdland and The Blue Note, where she was often in the company of leading instrumentalists, among them Ron Carter, Al Cohn, Hank Jones, Mel Lewis, Bucky Pizzarelli and John Scofield.

She formed a musically rewarding partnership with pianist Steve Kuhn, performing with him for more than 30 years, and she also worked often with bassist David Finck, who produced several of her sadly few record dates. Among these albums, all of which are worth hearing, are Love Dance (1983, Devil Moon), In The Shadows (1994, Owl), Everything I Need: Carol Fredette Sings Dave Frishberg And Bob Dorough (1999, Brownstone), Everything In Time (2007, Soundbrush) and No Sad Songs For Me (2014, Soundbrush).

As can be heard on all of these records, Fredette’s treatment of lyrics was especially effective, her understanding of the intentions of the writers clear. Sophisticated and intelligent, her interpretations were skilful and fluent, her phrasing showing understanding and appreciation of jazz. Speaking of her, Stan Getz, not known for lavish praise of singers, remarked: “She’s as good as they come.” Carol Fredette died 24 January 2021.

Bruce Crowther - 15 August 2019
Lorez Alexandria began her professional career singing with King Fleming’s small group, a band that gained immeasurably in popularity through her presence. Fleming made his first recording at his...