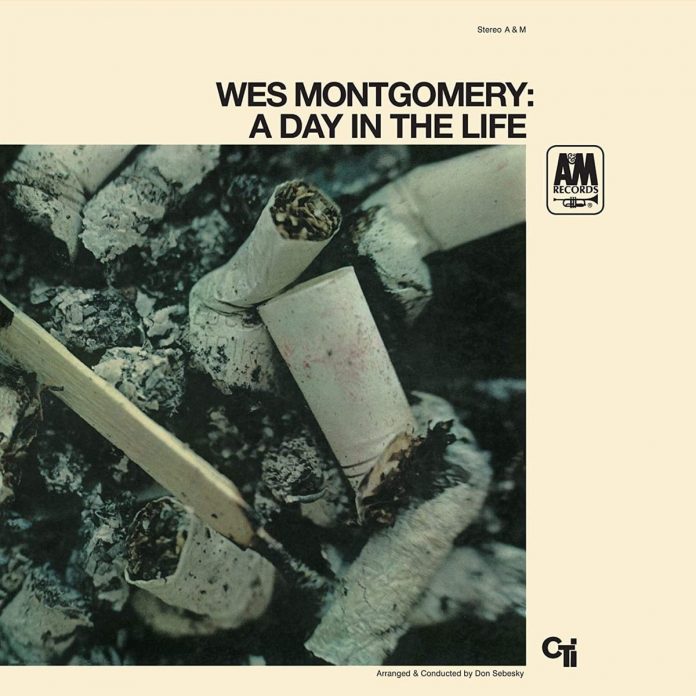 Originally released in 1967, Wes Montgomery’s A Day In The Life presents an interesting look at the guitarist, less jazz orientated, and instead demonstrating his skills in musical interpretation. Featuring both established jazz musicians and an orchestra, A Day In The Life, while not Montgomery’s best, is certainly enjoyable.

The title track is of course the Beatles’ famous song from Sgt. Pepper’s Lonely Hearts Club Band, which opens the album. Played at a slow, laidback tempo, with piano vamping and Montgomery taking artistic liberty with the melody, the song is not immediately recognisable. In the liner notes, George Frazier IV claims that Montgomery had not actually heard Sgt. Pepper’s when he recorded this album, which may explain its uniqueness, but the essence of the original is clearly palpable in Montgomery’s interpretation, and in the latter half of the track there is a sudden orchestral section, which contrasts with the small jazz ensemble beginning.

The following track presents an even further stylistic change with the bossa-nova rhythm and flute melody of Watch What Happens, written by Michel Legrand in 1964, and also covered by Tony Bennett and Oscar Peterson. The first side closes with the only original on the record, Angel, a sparse arrangement that lets Montgomery’s playing stand out, but with some accentuations from the orchestra.

The second side opens with another Beatles track, Eleanor Rigby, from Revolver, which starts with a string arrangement of the main melody, much closer in style to the original than the previous Beatles cover. Following this, the standard Willow Weep For Me is one of the better tracks, and like the first side of the LP, the final track, The Joker, is the most enjoyable, an upbeat piece with a great attacking solo from Montgomery, and the best demonstration of the energy that he was capable of creating.

As well as the strings and woodwinds of the orchestra, there are several notable jazz musicians present, with Herbie Hancock on piano, Ron Carter on bass, Grady Tate on drums. The songs were arranged by Don Sebesky and recorded by Rudy Van Gelder, with the influence of bossa-nova producer Creed Taylor being especially prominent.

In this reissue from Elemental, the original A&M Records album cover of an ashtray doesn’t convey the same message it may have done in 1967. Instead it looks remarkably unpleasant, bringing to mind a stop-smoking advert rather than anything else.

While this isn’t an essential listen from a jazz point of view, those interested in Montgomery’s canon as a whole or the influences of orchestral, Latin and popular music on jazz will find something useful.

Elliot Marlow-Stevens - 28 October 2021
Guitarists Larry Carlton and Paul Brown both have many credits to their name, Carlton of course having been one of the key guitarists on several of Steely Dan’s most...

The Terry Gibbs Quartet: That Swing Thing! & Straight Ahead: Featuring...