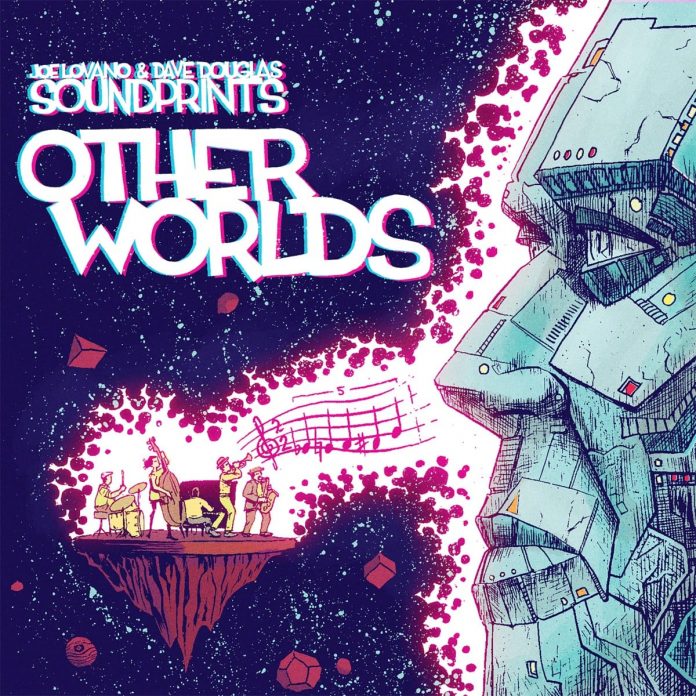 I’m not sure how this happened, but I was unfamiliar with Joe Lovano and Dave Douglas’s Soundprints quintet, a tribute band to Wayne Shorter. Their debut appeared on Blue Note in 2013, the year of Wayne Shorter’s 80th birthday, and the line-up has remained pianist Lawrence Fields, bassist Linda May Han Oh and drummer Joey Baron.

Scandal, the group’s 2018 follow-up on Greenleaf Music, featured new Lovano and Douglas compositions, plus arrangements of Shorter. Other Worlds is a complete album of originals inspired by the saxophonist.

Lovano, Douglas and Baron have been playing with each other since the 70s and 80s; Douglas and Baron were in John Zorn’s Masada. Lovano encountered Lawrence Fields as a student at Berklee, and the pianist has since worked with Nicholas Payton and Jeff “Tain” Watts.

Shorter is deep, for sure, and so is this tribute. “The whole concept of the band is dialogue and interaction,” Douglas notes. “Some pieces don’t have any chords, others have a lot of chords . . . Both the free context and the chordal context have the same level of dialogue and conversation,” he adds.

Highlights for me are Douglas’s wonderful Shorteresque compositions Life On Earth, with its light but driving jazz-rock beat reminiscent of late 60s Miles, and the gorgeous ballad Manitou in 6/8 time. On Douglas’s The Transcendentalists especially, his use of harmon mute adds a piquant effect.

Lovano’s Space Exploration, Shooting Stars and The Flight make up the non-contiguous Other Worlds Suite. The first of these opens the album, beginning abstractly before developing into a driving feel for Lovano’s improvisation, followed by a powerful free solo by Linda May Han Oh. On this album, the tenorist produces some of the finest playing from him that I’ve heard. Uncannily, at some points, such as during the superb solo on Life On Earth, I’m not sure I’d have distinguished his playing from Shorter’s in a blindfold test. Lawrence Fields is a wonderfully crisp, fluid and lucid soloist, and the rhythm section is nonpareil. Album-of-the-year material.