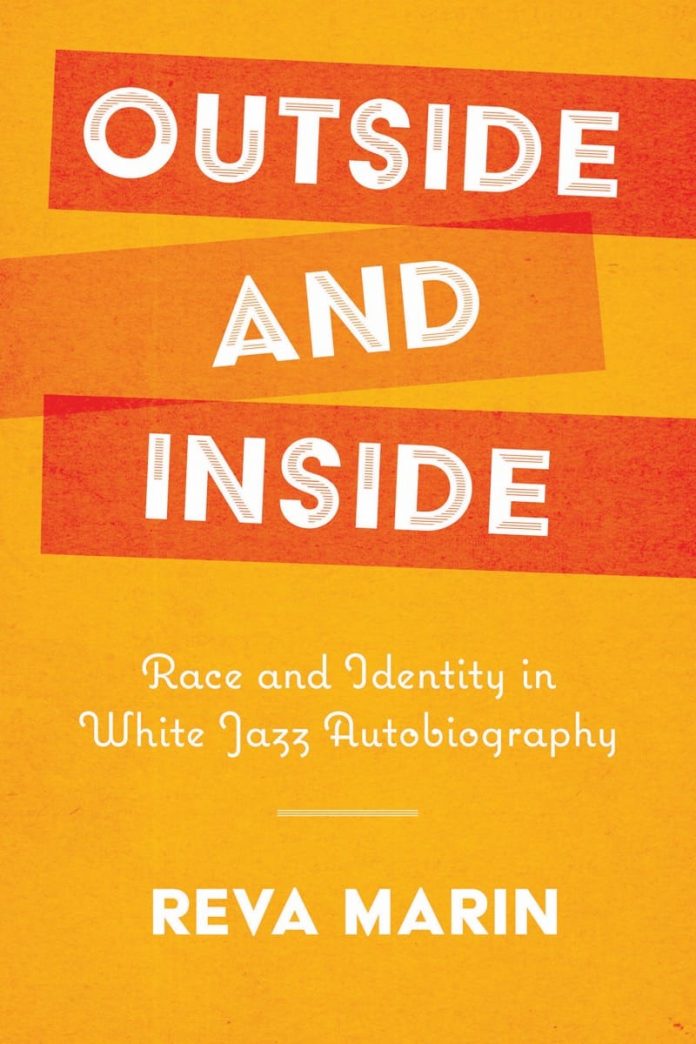 In 2004, Reva Marin was a finalist for the Fleck Award for the best book in the category Canadian Children’s Non-Fiction. Her entry was Oscar: The Life And Music Of Oscar Peterson, aimed at a teenage readership. In 2014, she received a PhD in Humanities from Toronto’s York University. She has also published an essay “Representations Of Identity In Jewish jazz Autobiography” in the Canadian Review Of American Studies. Outside And Inside expands this interest in jazz autobiography, and bears all the hallmarks of what was almost certainly her doctoral thesis. It is massively informed, with an impressive bibliography and extensive footnotes (some of which could have been included in the text), supplemented by a detailed index and well-chosen photos of her principal characters.

They are 16 white male jazz instrumentalists, from a variety of socio-economic/religious backgrounds, who (with their white collaborators), published autobiographies which retail their experiences and influences in the African-American dominated worlds of traditional, swing and mainstream jazz from the 1920s to the 1980s. They include Benny Goodman, Artie Shaw, Charlie Barnet, Mezz Mezzrow, Bob Wilber, Max Kaminsky, Eddie Condon, Art Pepper and the lesser known pianist Don Asher and clarinettist Tom Sancton. United in a love of jazz, and as performers, aware of their “jazz identity”, they were often ambivalent and aggressive in their respective memoirs. As Marin observes, “the effort of white jazz musicians to become insiders, or conversely to justify their outsider status, assumes great significance within their narratives”.

To cite a few examples: In Eddie Condon’s co-authored autobiography – with Thomas Sugrue – We Called It Music: A Generation Of Jazz (1956), there is no mention of African American musicians, but rather an emphasis on Condon’s Irish heritage. But in the chapters attributed to Sugrue, the stress is on the multi-racial and ethnic influences on Condon’s musical development. Mezz Mezzrow (born Milton Mesirow, in 1899), despite (or because of) his Jewish identity, achieved the distinction of becoming “the most famous white Negro” who made every effort to emulate African American speech and mannerisms. In an afterword to a 1972 edition of Really The Blues his collaborator Bernard Wolfe claimed that after living in Harlem for several years, Mezzrow believed that his lips had thickened, his skin darkened and he had become “a pure Black”.

Bob Wilber in Music Was Not Enough (1987) acknowledges the influence of his parents in fostering his love of jazz. He also states that “this is the story of an angry man” who in middle age had come to realise that “music had not provided the answer to all of life’s problems – that indeed music was not enough”. He also simultaneously stresses his distance from, and relationship to, the New Orleans tradition, as initially moulded by his experiences with Sidney Bechet (with whom he was always identified), but also filtered through his own privileged white middle-class Westchester, New York background. Curiously, in later years, Wilber and his English wife, singer “Pug” Horton, lived happily (as I can attest) in the equally select but largely jazz-starved village of Chipping Campden, where he died in August 2019.

In The Trouble With Cinderella: An Outline Of Identity (1962), the almost entirely self-absorbed Artie Shaw offers only a sketchy account of his own jazz education – apart from an extended (and unexpected) description of his relationship with pianist Willie “the Lion” Smith in Harlem at Pod’s and Jerry’s famous nightclub. Marin comments tartly that “despite his endless musings on the psychological price of fame and fortune, [Shaw’s] central associations seem to have been among the wealthy white elite of the American music, literary, and entertainment worlds”.

Irving Kolodin, Benny Goodman’s collaborator on The Kingdom Of Swing (1939), was well-versed in jazz history. He wrote the programme notes for Goodman’s famous 1938 Carnegie Hall concert – but tended to evaluate “American jazz traditions in relation to European art music”. Goodman, of course, also achieved fame (if not fortune) as a player of “classical” music, and also performed with an “integrated” swing trio and quartet.

Art Pepper’s searing autobiography Straight Life: The Story Of Art Pepper (1979), “written” in collaboration with his wife Laurie, is the subject of perhaps the most persuasive chapter in Outside And Inside. Not only does Marin acknowledge his wife’s help, but also makes excellent use of her own harrowing autobiography Art: Why I Stuck With a Junkie Jazzman (2014) to illustrate “the motif of the white jazz musician as loner and outsider”. Once married, Laurie became involved in all aspects (including his persistent drug addictions) of Pepper’s latter-day musical renaissance, and restored him to national and international attention. In Straight Life, she suggests that Pepper’s “authorised version” (my phrase) of his life depicted a “largely inward-looking and solitary journey” which distinguished his account from “the community-focused portraits” of his African American jazz peers who grew up in Southern California.

At the conclusion of a nuanced if discursive study Marin reflects that her concerns have been with “the continuing relevance of issues at the heart of twentieth century white jazz autobiography, including debates over authenticity, racism, privilege and claims to cultural authority”. She hopes that her interpretation of these disparate autobiographies “illustrates the potential of jazz to encourage inter-cultural contact and exchange of a kind and degree far beyond that which was typically occurring in the still-segregated US society”. It does.

Elliot Marlow-Stevens - 26 March 2021
In his career so far, Tamil Rogeon has composed music for acclaimed film and television, conducted the Melbourne Symphony Orchestra, and has had orchestral work premiered at the Melbourne...