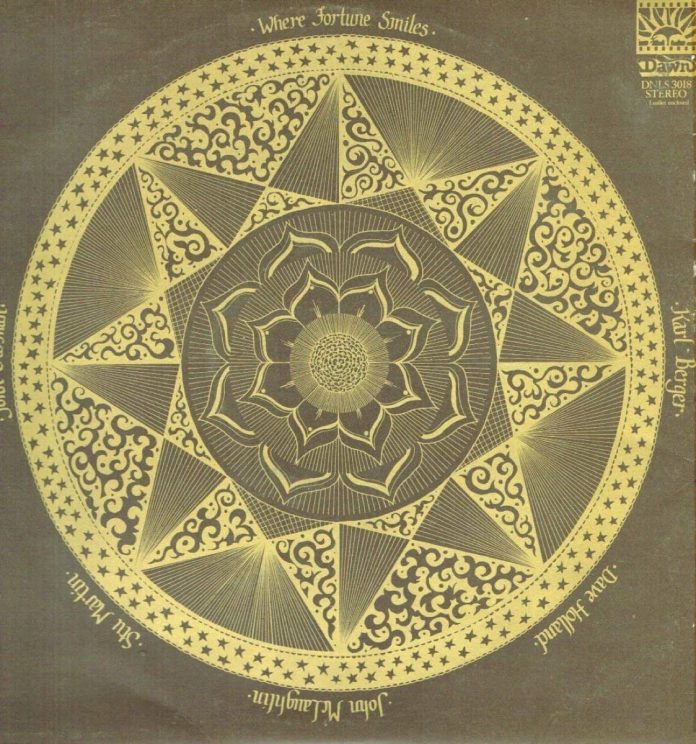 This is an uncompromising jazz record, with a two-man rhythm section that really cooks. I have never heard Holland play with such authority and Martin is his usual in­tricate and driving self. It is, in fact, the excellent balance between the drums and the rest of the quintet that makes the record so successful. The compositions are all by McLaughlin and Surman and there is not one weak item. Surman’s aggressive Glancing and McLaughlin’s gentle Earth Bound are particularly noteworthy.

Of the main soloists, Surman is the most outstanding. He does not play at all on Where Fortune but his beautiful solo on Earth Bound is a model of relaxation and logical development, while his blustering contribution to New Peace encompasses a wide emotional range and displays genuine crea­tivity.

Berger still has that strange, unworldly tone on his instrument but, as his work on Fortune Smiles will attest, he can be a player of real sensitivity. He can also sail out on romping swingers like Hope, where the sheer impetus of his playing leads the rest of the combo into a rousing climax. McLaughlin’s solo work still fails to impress. He produces imaginative sounds which might well be ideal in a pop/underground context or as an accompaniment to a light show but which sound incredibly corny in such fast company. His work within the group, however, is more impressive. Being slightly bound by conven­tions proves to be an advantage in his case and, when feeding his fellow soloists with reliable harmonic signposts, he distinguishes himself.

With three nations represented in the line­up, this must be considered an international effort and the outcome can be recommended to all but the real reactionaries. Surman grows in stature continually and this record can be added to the growing library of his recorded work without hesitation. If Berger could join the trio on a permanent basis, it might be artistically stimulating to all concerned.