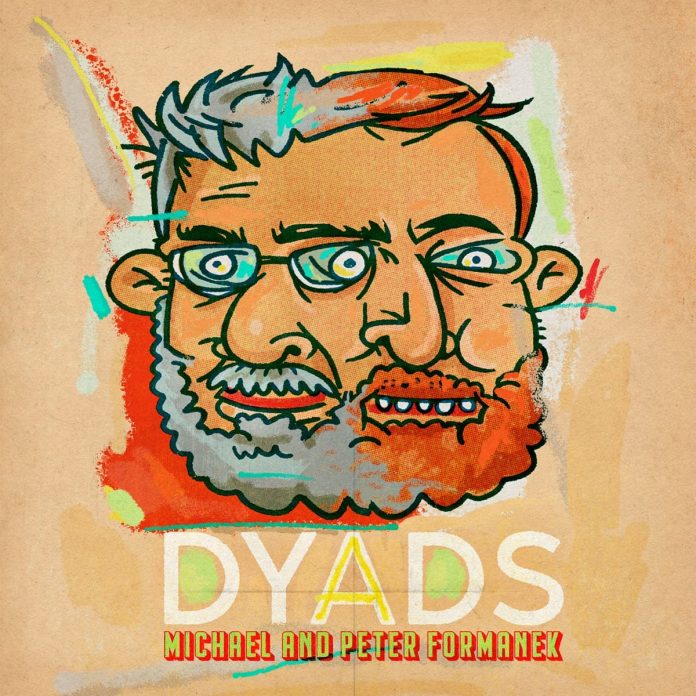 Bassist Michael Formanek is well known for his association with Tim Berne, Marty Ehlrich et al, as well as his current membership of Thumbscrew alongside Mary Halvorson. His young saxophonist son Peter is an accomplished musician who started making music with his father before he had even started school and has performed in a duo with him since 2017.

Dyads was recorded after the two had toured the eastern and midwestern US in November 2019. That might make Dyads sound something of a vanity project or blatant jazz nepotism, but luckily it is nothing of the kind.

Michael has his own very distinctive tone, a deep, dark resonance as well virtuosic technique and nimbleness. But Peter, too, while possibly showing the influence of, say, Berne or Don Byron, also has his own distinctive voice. Sinuous, intricate and often operating in the lower registers on both tenor and clarinet, on which he occasionally brings to mind Jimmy Giuffre, his is a persistent voice that provides both melodic narrative but also rhythmic drive.

On the aptly titled Wandering, Searching, Digging, Uncovering, he is investigative while father worries away furiously on the bass. On After You they call and respond to each other throughout in invigorating dialogue, a dialogue they create on almost every track. On How Was The Drive? they combine beautifully, elsewhere rubbing up alongside each other with a harsh energy. With writing credits shared between them, this is a truly collaborative set, from two equals.

Discography
Two, Not One; Wandering, Searching, Digging, Uncovering; After You; The Woods; Push Comes To Shove; How Was The Drive?; There’s No There There; Wavy Lines; Hurricane; Ballad Of The Weak DNA; That Was Then (72.14)
Michael Formanek (b); Peter Formanek (ts, cl). New Jersey, 30 December 2019
Out of Your Head Records OOYH 008

Peter Gamble - 30 December 2021
Saxophonist Jim Snidero has been releasing albums on the Savant label since 2007, so it is only fitting the re-release of Strings should appear under that imprint. It makes...

Jazz Journal - 30 April 2019
Opponents of Bailey's playing often claim that there is a sameness about his performances. Just the opposite is true and at times we hear a side of his musical...