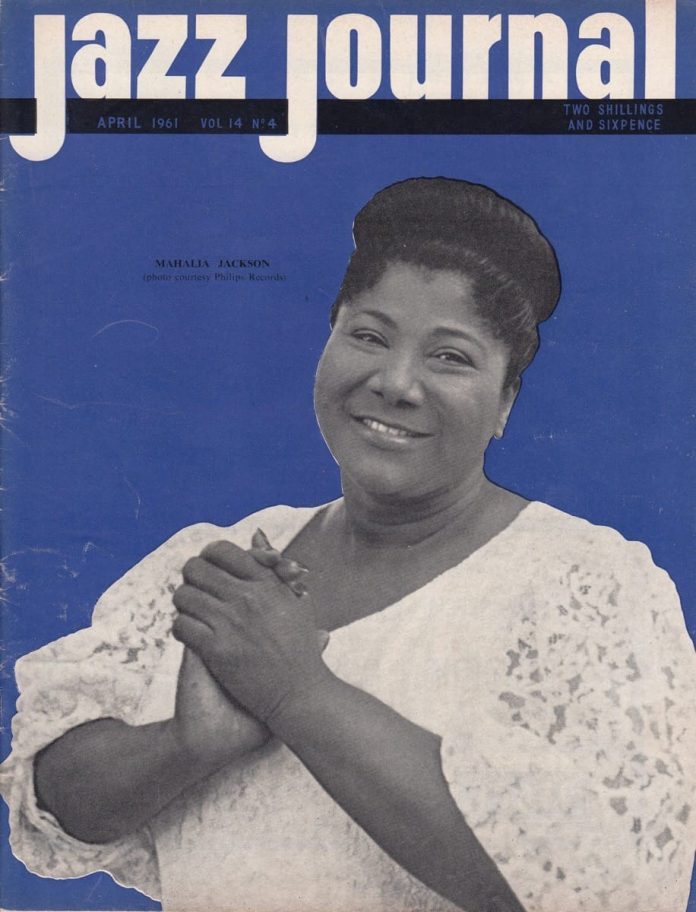 After several albums on which she fought losing battles with cloying choirs and staggering armies of angelic fiddles, Mahalia here returns trium­phantly to the style of her earlier re­cordings – alone except for Mildred Falls, a quiet drummer and a very distant, unobtrusive choir. She just sings, and it is the Apollo sessions all over again – or almost.

Some tracks are too “straight” for jazz tastes (“Because His Name”, “God Is So Good”, “Duty”), and “Brown Baby” is the sort of pseudo-folk melodrama that Belafonte sings for the oo-ahs. But on the remain­der Mahalia sings out beautifully. Her timing is unbelievable, and in it lies the secret of her ability to swing in that huge, breath-taking manner that is today a secret shared by an ever-decreasing few.

In the same April 1961 issue of Jazz Journal, which featured Mahalia Jackson on the cover (see above), editor Sinclair Traill introduced her to the readers ahead of her London concert:

For one night only, on April 7 at the Albert Hall, you will have the chance to hear the greatest of all the gospel singers, Mahalia Jackson. I advise you not to miss her, for here is a singer who, whilst adhering strictly to her religious convictions, sings with a rhythmical drive and beat that can be rivalled only by the best jazz bands and before which the rhythm of the rock and rollers pales into insignificance. Together with her accompanist – Mildred Falls – she can create a tremendous excitement, an ex­citement only to be equalled by the really great singers in music.

There are few artists in any field of music who possess the simple dignity that is hers, and few who have a greater ability to move an audience by the pro­jected emotion of their singing. Miss Jackson has a personal quality that makes her in complete rapport with whoever hears her – a quality of human warmth and sympathy, allied to a com­plete genuine belief in her own religious convictions.

Her programmes are limited to songs of her own faith, but all are so full of ecstasy and exultation, and are sung with such a swing that it is a strange person who, coming away from a Mahalia concert, is not profoundly moved.

I strongly urge you to make every effort to hear this exceptional, vibrant, happy singer. It is an experience not to be missed.