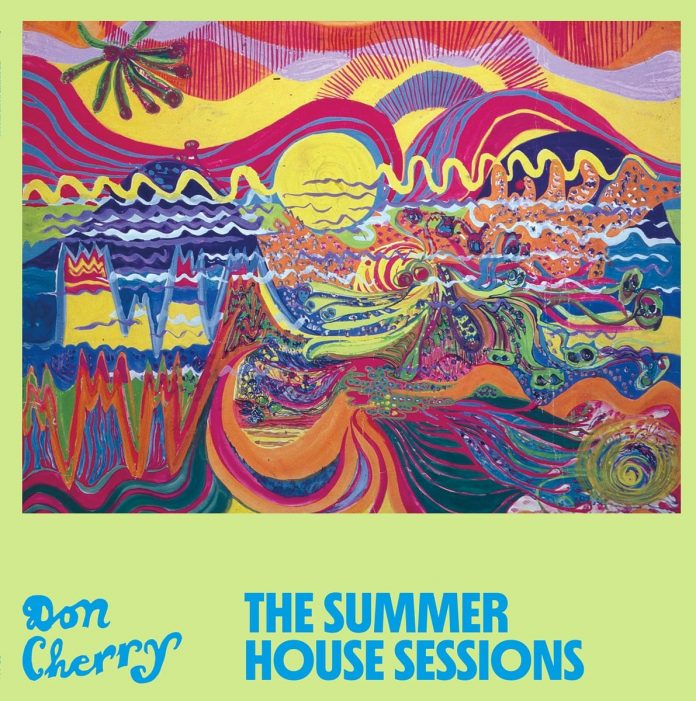 Presenting an interesting transitional point in the history of one of jazz’s most innovative players, The Summer House Sessions captures Don Cherry leading an experimental group in Sweden, soon to shift his focus toward the incorporation of world music into jazz improvisation.

Cherry had been a key member of Ornette Coleman’s quartet, also having worked with other free-jazz luminaries such as John Coltrane and Archie Shepp. Cherry moved to Stockholm in 1968 and began running weekly workshops with an ensemble of musicians, exploring and researching new musical techniques and ideas. Out of these workshops came a series of recordings, including this album, made in a summer house with eight musicians not far from Stockholm. Until now it has been held in the Swedish Jazz Archive.

While divided into distinct pieces on the albums track list, they are actually two seamless recordings, over 23 minutes long each. Side one opens with echoing flutes and ambient noise, talking and laughing, all in a low-fidelity haze. Percussion enters, the energy builds, and the ensemble improvise, responding to one another and creating rich and complex harmonic and rhythmic passages. While free improvisation is at its core, the group still uses existing material as inspiration, and the tracks are not entirely devoid of prewritten sections, although they arise organically.

The divisions between each track, however, are difficult to ascertain, and instead it is the emergence of melodic themes and fragments that signal a new section. The second side, instead of beginning gradually, fades straight in with fast drumming which is joined by blindingly quick trumpet and saxophone. The intensity is much greater, and rather than taking turns, there are more moments of unison between the horns.

This review is for what will be the LP release (accessed digitally), of which 2000 copies will be made, and there will also be a two-disc CD version that features bonus material from the sessions, with a varying line-up, of which 500 copies will be made. Capturing brilliant and organic improvisation, The Summer House Sessions offers a fascinating glimpse into Cherry’s world of musical research and experimentation.