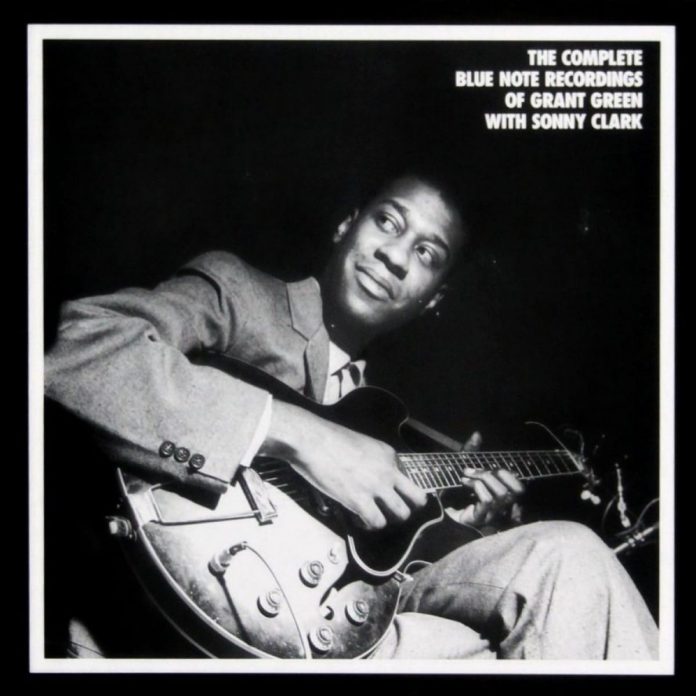 Grant Green never achieved the kind of profile enjoyed by such of his peers as Wes Montgomery and Kenny Burrell, but as this four-CD box set from Mosaic reaffirms, his best playing was often more rewarding and distinctive than theirs.

Green’s choice of material through his peak period in the early sixties reflected both his interest in bebop and in the then novel modal jazz. He is at his strongest on standard song forms, probably because he was thoroughly familiar with the har­monic frameworks involved and had acquired a repertoire of appropriate licks and phrases through a profound study of Char­lies Parker and Christian. How­ever this repertoire had its limits, and as essayist Bob Blumenthal notes, Green could be repetitive.

This tendency is especially apparent on The Song Is You, where a little chromatic run down to the third of the dominant appears seven times during Green’s solo and three times during his trading with Blakey; even Clark catches the bug, using the figure four times in his solo; if this session had a leitmotif, this was it. On the other hand, as Blumenthal further notes, Green was able to turn rep­etition into a virtue, effecting motivic development by shifting the rhythmic emphasis of the repeated figure. On other occa­sions, notably in the captivating descending arpeggio figure in his solo on Backyard, he maintains the rhythmic shape while altering the harmony.

At all times he links his ideas with passion, imagina­tion and melodic flair. Equally importantly, his judicious combi­nation of arpeggios and chromat­icism is expressed with a downright funky sensibility. Indeed, the rhythmic character of his lines is one of his distinguish­ing marks. Where other guitarists of his generation dwelt in swing-eighth rhythms, Green was a dis­tinctly funky player, tending to accent squarely, but slightly behind the beat. This is well-illus­trated by his a cappella break on Someday My Prince, where his phrasing stands in contrast to the rhythmic tilt of the preceding ensemble. This firmness of phra­sing, allied to the brittle tone of his instrument, gives his lines a taut, springy quality, at least at mid­dling tempos. On brisker pieces, like Tune Up, he begins to sound uncomfortable, his phrasing tend­ing to fracture.

Although Green the bebopper remains unassailable, his work in the modal idiom sounds dated. There are three such items here – the So What/Impressions deriva­tive Two For One, the Mr PC soundalike Shadrack and the modal anthem My Favorite Things. In these settings, Green’s playing is generally lacklustre, the vivacity and drive of his best stan­dards playing replaced by mori­bund, one-dimensional solos lacking tension and forward motion. Green tends to stick close to the mode in question, leaning melodramatically on ninths and thirteenths and failing to exploit the opportunities for harmonic superimposition inherent in modal jazz. Far from defying ton­ality, Green finds himself trapped within it.

Clark is excellent almost with­out exception, though he too seems a little unsure of how to make the most of modality. He strives for authenticity with Tyner-like harmonies on Favorite Things, but his solo is hesitant. No such problems trouble Ike Que­bec, who plays with passion and authority whatever the setting. His appearance on Someday My Prince comes as a revelation after three trio discs and brings a new warmth, breadth and vigour to the music. He builds a fine solo here, controlling climax and tension with admirable skill, now bleary and relaxed, now impassioned, rather in the manner of Stan Getz.

The set is presented in the usual elegant Mosaic style and includes much rare material. The (d) ses­sion is the most recently seen: with the addition of Count Every Star it constituted the late eighties Blue Note release Born To Be Blue. The (a) and (c) sessions were pre­viously available only as limited edition Japanese issues, the (b) session as the 1980 Nigeria LP; the rest of the material is unissued.

I noticed a couple of anomalies in the discography – Quebec is not listed for Count Every Star and the dates for the (d) session do not agree with those given on the Born To Be Blue CD. There is also some drop-out during Clark’s solo on Gooden’s Corner, but other­wise this limited edition of 7,500 sets is a valuable testament to Green’s talent. It comes complete with some vivid photography from the sessions and is available mail order from Mosaic Records, 35 Melrose Place, Stamford, Con­necticut 06902, USA.

On Matador, Green is even further into modal territory, and the intervening three years show little change in his approach to soloing in modal contexts. With the exception of the title track, these are largely two and three chord affairs and not helped by being predominantly in minor keys and at funereal tempos. There’s little harmonic diversion in either vehicles or soloists, nor is Green’s usual rhythmic verve in evidence.

Reaching Out adds three unreleased alternate takes to the Green Blues CD which was issued briefly on Vogue 600619 last year but withdrawn due to licensing problems. It’s a vibrant, appealing session, notwithstanding the presence of a couple of modal items, and is enlivened in partic­ular by some fine playing by Frank Haynes and Ben Tucker. Tucker also wrote the earthy blues vamp Baby, You Should Know It. Unfor­tunately the greater part of the CD runs about a quarter tone sharp and there is significant hiss throughout – neither of which problems were apparent on the Vogue issue. That aside, it’s a ses­sion from Green’s best period and recommended to those who can’t stretch to the Mosaic set.

Barry Witherden - 15 May 2021
August 2020 saw the 100th anniversary of the birth of Charlie Parker. By then he had been dead for more than 65 years but he remains hugely influential, directly...