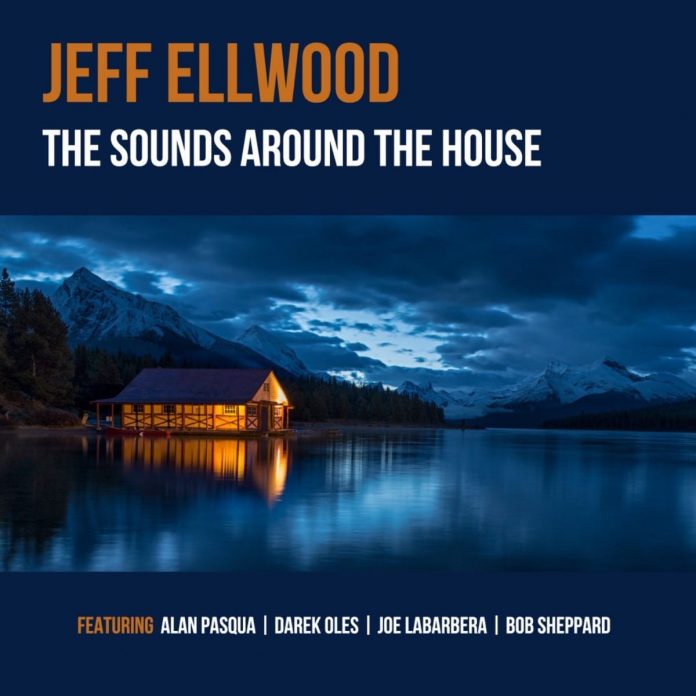 Musicians that play tenor saxophone, the instrument that is synonymous with jazz in the eyes of many, come in all shapes and sizes. You have to come up with something special to back up your claim. Jeff Ellwood prominently staked out his turf on the West Coast of the USA. The command of the instrument of the Cal State Fullerton professor is exceptional and his tone production is refined. As such, Ellwood sustains in-your-face notes and long vigorous lines that overwhelm without sensationalism.

Ellwood is a sought-after team player who has worked with such diverse artists as James Moody, Arturo Sandoval, Stevie Wonder and Dave Grusin. On his long-awaited debut album The Sounds Around The House, Ellwood’s team consists of pianist and mentor Alan Pasqua, bassist Darek Oles and drummer Joe LaBarbera, acclaimed collaborator of Art Pepper, Jim Hall and, famously, Bill Evans. It is striking that, powerful as it may be, Ellwood’s sound is like blue velvet. It warrants comparison with the voice of a smooth soul singer that has them swooning with balanced cadenzas, even if at times Ellwood permits himself a cautious growl.

Ellwood’s velvet sound emphasises a variety a material. His variation on All The Things You Are, U.R. (pun intended) and the Latin-tinged compositions of Alan Pasqua (Agrodolche and Barcelona) are particularly strong. Restrained but urgently present, LaBarbera deepens the contrast between Ellwood’s sweeping stories and Pasqua’s brightening, elegant patterns. The seldom performed Wilder/Mercer ballad The Sounds Around The House (particularly appropriate pun these days) is rather syrupy. Consequently, room temperature has dropped, but it picks up with Dick Oatt’s King Henry, a Coltrane-styled modal vamp that is flawless yet not as splashing and crackling as hoped.

On the other hand, the band notches it up a gear through the medium-fast hard bop lane of Oles’ The Honeymoon and carries the ripping and roaring Ellwood to an astonishing finish. His blasts would have pleased the late Roland Kirk. It’s a pity that the wolf has been out only this one time, but it at least shows tremendous potential for future releases.

Brian Payne - 27 April 2022
This CD is a reissue of Freddie Hubbard’s 1969 LP that was recorded at MPS’s home-based studio in the Black Forest during a European tour. It’s an impromptu affair...