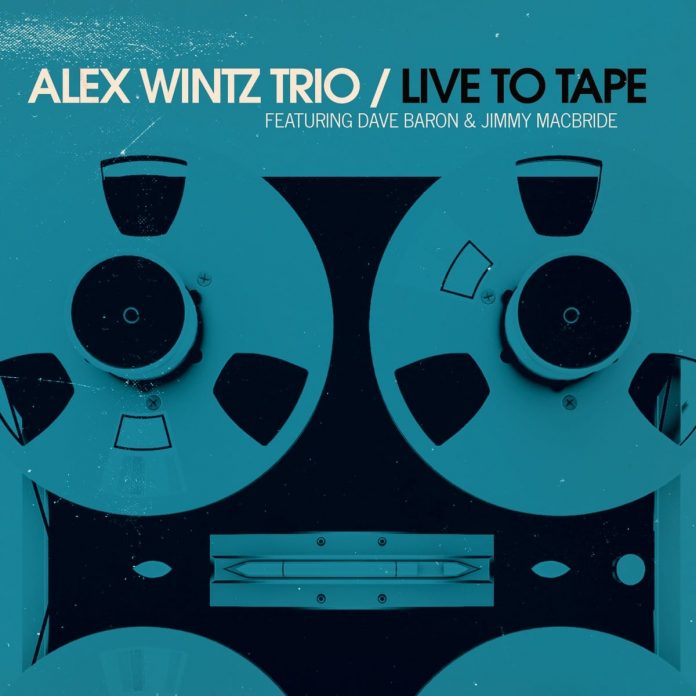 The clue’s in the title and the “tape” in question is facilitated by a tank-like 230kg Studer A827 2” 24-track reel-to-reel analogue tape recorder introduced over 30 years ago. Its older brother, the Studer J35, was used at Abbey Road Studios to record The Beatles’ Sgt Pepper.

Recording engineer Evan Sutton approached his friend Alex Wintz with the suggestion that he record his trio at Red Bull Studios in New York where they had recently acquired an A827 Studer machine. Given the proliferation of digital recording technology and its (arguably) concomitant cold and soul-less precision, this was an opportunity for Wintz that was too good to miss. The trio recorded this album in a one-day session using tunes mostly written by Wintz. Whilst this set is by no means straightahead, its use of the analogue machine emulates the warmth of the studio recordings made famous by Blue Note Records in their prime.

Born in California and raised in New Jersey, Wintz began playing guitar at an early age and later graduated summa cum laude from the Berklee College of Music in May 2010, completing his master’s degree at Juilliard in May 2012. The Grammy-nominated guitarist has performed at the Newport, Monterey, Montreux and Montréal jazz festivals and many other major venues. Amongst other plaudits he is a National Foundation of the Arts ARTS Award winner. He now teaches at the New Jersey Performing Arts Center’s Jazz for Teens program, teaching guitar technique, advanced theory, ear training, repertory building and ensembles. Live To Tape is his second album, following on from his debut release LifeCycle (Culture Shock, 2017).

Wintz evinces an engaging playing style which, without being in the least derivative, evokes the essence of the classic jazz guitarists of the 1960s such as Jim Hall, Johnny Smith, Kenny Burrell and Herb Ellis. But Wintz can hardly be accused of wallowing in the past since he offers here a stunning cover version of Annie (St Vincent) Clark’s winsome ballad What Me Worry? from her debut album Marry Me (Beggars Banquet, 2007). A couple more covers include the Leonard/Martin standard I’m All Smiles and a remarkably faithful interpretation of Herbie Hancock’s Textures from Mr. Hands (Columbia, 1980), the original version an all-synthesizer track played solely by Hancock. Amongst the originals the groovy opener Idris is a paean to the late drummer Idris Muhammad.

Aside from the trio’s noticeably warm sound captured by the Studer, Wintz’s guitar produces a gorgeously clean tone, mercifully unadulterated by the seemingly obligatory bank of effects pedals polluting so many guitars today. If you’ll excuse the pun, Wintz’s trio really has got this one taped.