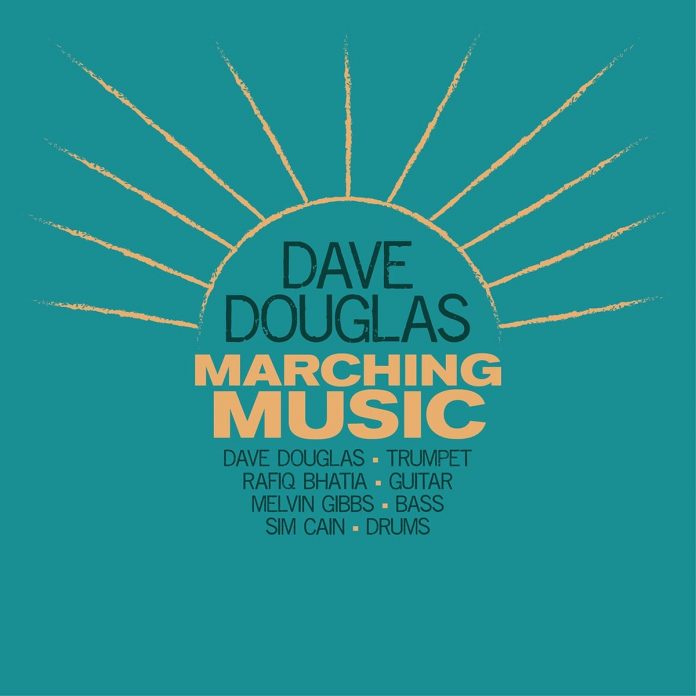 Douglas describes this as “a new suite of compositions for our moment. I conceived of these pieces as music you could have in your headphones when you attend Climate Marches, Demonstrations for Equal Rights, Voting Rights Movements, and all other actions towards a just society”. Although recorded nearly a year before it was scheduled to be released on the day of the US presidential election it was meant to “spur all of us to go and vote … to step up and be a part of what our nation truly is”.

No matter how much one sympathises with the polemical stance of a piece of art it needs to work as a painting, a film or whatever. Marching Music is consistently engaging and satisfying qua music. Whilst the titles are keys to Douglas’s meaning the music avoids being crudely programmatic or pedestrianly literal and, notwithstanding the evident passion for the causes referenced by various tracks, the music is never hectoring.

The quartet establishes and maintains a strong group identity but embraces a variety of moods. Bhatia injects harsh textures here and there and some of the grittiest playing bookends the album on Parables and Persistent Hats as well as introducing Whose Streets. Ten To Midnight is underpinned by a suitably dark, ominous bass riff (Gibbs plays admirably throughout the session) whilst Douglas lays out a husky, subtle theme that could grace the closing credits of a superior private-eye film. Similarly, Lenape involves tough rhythmic backing with the tension lightened by sinuous trumpet and guitar lines.

I had to look up the significance of a couple of the titles and am more than happy to share my newly acquired knowledge: The Lenape were original inhabitants of what is now Manhattan and in Manhattan’s Foley Square there is a park named after Thomas Paine who, you hardly need me to remind you, helped inspire the American War of Independence.

Douglas is one of those musicians who is involved with so many projects as trumpeter, composer and educator that you wonder how he ever gets time to blow his nose, let alone make recordings as good as this. I first encountered him when he visited London with Vincent Herring’s band, playing at Peter Ind’s club in the 80s. I was impressed then and have never been disappointed with anything I have heard him do subsequently.

Cathi Hayes: It’s All Right With Me / Lu Ann Sims: At Separate Tables

Sally Evans-Darby - 05 May 2020
Continuing Fresh Sounds’ The Best Voices Time Forgot series, this double set unearths another two singers whose names are likely to be little known, if at all. Here, happily,...