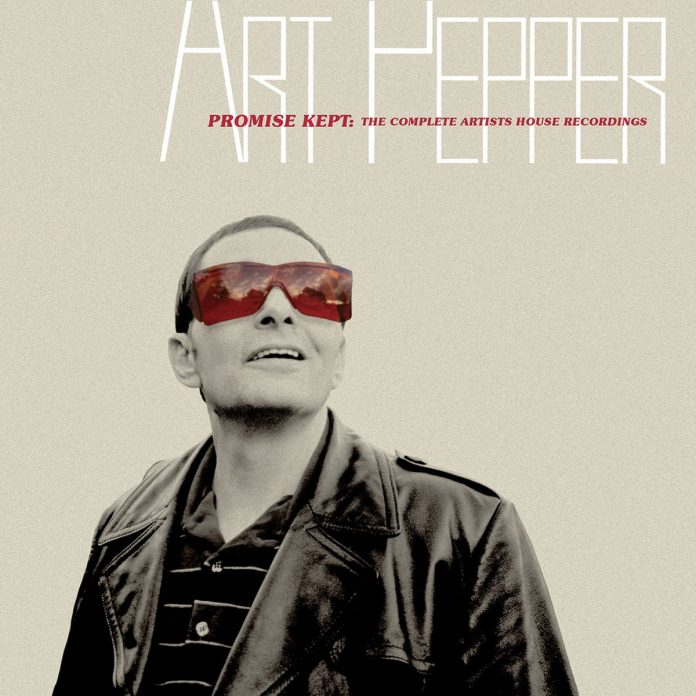 After his numerous drug convictions in the 1950s and repeated incarcerations, Art Pepper in the last 10 years of his life, with the encouragement of his friend and producer John Snyder, staged a second coming. Pepperites (include me in) will welcome this release of his latter-day recordings with two accomplished and supportive East and West Coast rhythm sections.

The first, So In Love, was actually issued on Artists House; New York Album, Artworks and Stardust were released in the mid-1980s and after his death in 1982. These reissues now reappear with additional tracks and alternative takes. Nineteen unreleased recordings are included on the first four albums. The fifth compilation, entitled simply Sessions, comprises 11 studio recordings including alternate takes, unissued titles and false starts.

Laurie Pepper is critical of the “elitist-black-New-Yorker-jazzer attitude” towards her husband, with Carter and Jones the prime offenders.

This is a cornucopia, with excellent reproduction, snatches of studio comments, and brief but pertinent comments in the essay by his wife, saviour, manager and co-producer of CDs 3, 4 and 5, Laurie Pepper. The only black mark against the semi-monumental set has to be awarded to the miniscule typeface listing titles and personnel on the back of each sleeve and parts of the booklet. Even with the aid of a powerful magnifying glass, it was only with great difficulty that I was able to decipher the (sparse) information accompanying the set. Those involved should be looking for another line of work. That gripe over, it’s time to look at the individual albums.

So In Love features both the New York (Hank Jones, Ron Carter, Al Foster) and Los Angeles (George Cables, Charlie Haden and Billy Higgins) rhythm sections. Laurie Pepper is critical of the “elitist-black-New-Yorker-jazzer attitude” towards her husband, with Carter and Jones the prime offenders. In particular she faults their backing of the ballad Yesterdays (one of the bonus tracks). To these ears, Art gradually relaxed, and turned in memorable renditions of Straight No Chaser (2 takes, the second in LA), Diane, Yesterdays and Landscape. In contrast, the LA tracks are faultless, with a jaunty and joyous Blues For Blanche (a Pepper original, named for his cat), an uptempo So In Love, and an emotional Stardust with Art at his most inventive and obviously happy with his rhythmic companions.

Art Works, recorded entirely with the West Coast combo, is notable for his unaccompanied and flawless solo interpretations of Body And Soul (2 takes) and You Go To My Head. He then turns to clarinet on Anthropology (with Cables laying out) and the always dependable Haden providing sterling support. Desafinado receives an authentic bossa-nova treatment, while Donna Lee has Art in full flight with Cables et al keeping pace. Two additional reworkings of Blues For Blanche are equally satisfying. In every appearance, here and on other albums, Cables proves to be Pepper’s best pianist and a force in his own right.

New York Album again features only the New York musicians, but to better effect than on the So In Love sessions. A sprightly Night In Tunisia is followed by an almost unbearably plaintiff Lover Man, with Art on alto, immediately followed by a straightahead Straight, No Chaser (2 takes). Duo Blues has Art at his earthiest, with an obliging walking bass from Carter. Two takes of My Friend John (with notable solos from Hank Jones) are sincere and moving tributes to a co-organiser of the session. Johnny’s Blues (a saxophone solo), has an exasperated Pepper exclaiming “I’ve got to do another one!” before producing a note-perfect rendition.

Stardust has more material (six titles) than the original album. It includes an alternate version of My Friend John, with Cables and Haden offering sensitive support. Tin Tin Deo – which Pepper played on Meets The Rhythm Section (1957), receives a Latinate vibe, with Art emoting at high temperature. Both takes of In A Mellow Tone have Art delivering a liquid clarinet solo, firmly propelled by Haden, while Stardust (2 takes) receives gentle and almost sotto voce renditions.

The bonus disc Sessions contains 11 tracks recorded in LA. It includes three false starts on My Friend John, and Art exclaiming (to the band’s audible amusement) “I fucked it up”, as well as three alternate takes of the ubiquitous Blues For Blanche, with another excellent take of Lover Man. If none of these titles are quite up to the standards of their other appearances, they are none the less well worth listening to.

Promise Kept lives up to its billing. Laurie Pepper notes that John Snyder and Art “kept their promises. John brought Art into the wider world; he put him on the road. Just as he said he would, he brought him to the Village Vanguard, got his picture in the papers, and got him on the radio. From Art, John got his dearest wish. He made these 32 [sic] recordings”. That Pepper, an incurable heroin addict, was able, given his deteriorating mental and physical condition, to produce so many minor masterpieces in his remaining years is a cause for posthumous celebration by Pepperites and the yet-to-be converted.

Derek Ansell - 19 November 2020
The two LPs here are reproduced with the original packaging and artwork of the first issue on Rounder Records. Recorded a few months after the catastrophic Hurricane Katrina in...