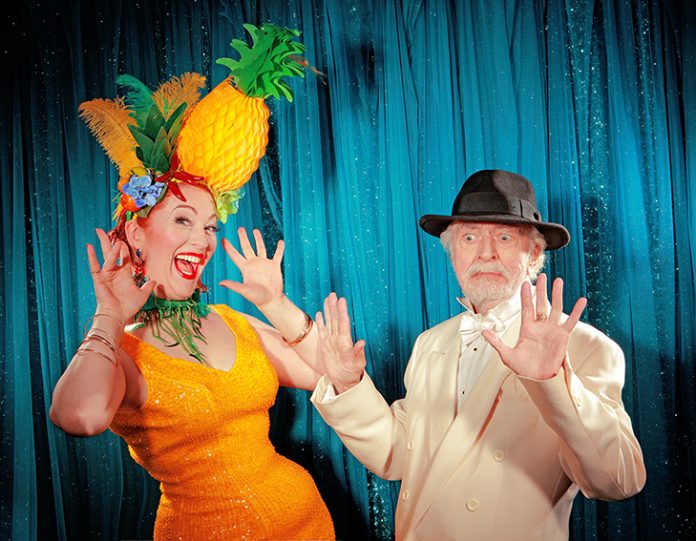 From time to time – providing it’s not too often – it does no lasting harm to check your comfort zone at the door of a venue then claim a seat ringside knowing you’ll be obliged to meet alien performers not merely halfway but more like 80/20 in their favour. It was this kind of thinking that found me at Crazy Coqs late on 6 June.

This is a relatively new outfit – four instruments and a vocalist – in which the pianist had a good three generations on the other four. Three of the players, bass guitarist Jesse Eigan, drummer Vidar Norheim, and gypsy-jazz guitarist Micky Dunn seemed happy to turn up in conventional jackets and trousers albeit sans neckties but veteran pianist Kenny Clayton opted for Wurzel Gummidge-lite whilst vocalist Laura Doyle had approximately 17 pounds less fruit on her head and five more on her frame than Carmen Miranda, clearly a role model albeit one lost, I suspect, on the bulk of the audience.

The agency handling the group offered complimentary drinks in the American Bar adjacent to Crazy Coqs from 8.15, a full hour before the first set which may have had something to do with the way the SRO crowd whistled, shouted and clapped her dramatic entrance – she appeared in the main doorway, emitted a “Hola!” and sashayed through the audience and on to the stand floating on the salsa beat laid down by the already-in-situ band. If I were in the crowd-pleasing business I’d want 10 like her. Her first move was to bring out Kenny Clayton, giving him a send-in his experience and talent warranted and then we were off to the races lickety-split, the numbers falling like pins in a bowling alley hosting a grudge match.

When they were able to grab four or even eight bars all four musicians demonstrated their mastery of their instruments laced with showmanship, leaving Laura outclassed technically – try as I might and with the best will in the world I was completely unable to distinguish The Coffee Song from The Girl From Ipanema and One-Note Samba – although honesty compels me to state that to the audience this mattered not a whit or a jot so adept was she at “selling” a song with every bone in her body.

The second set slowed the frenetic pace to something approaching a crawl with Kenny’s virtually solo medley of Beatles’ songs – Michelle, Yesterday, Norwegian Wood – then Laura was back with what seemed like a triple-time Can’t Buy Me Love then what was, for me, her most accessible number of the evening, And I Love Him. Kenny displayed a lovely singing voice on his own composition The Memory Of You.

I’m slightly baffled by the collaboration. It’s clear that Kenny working as a solo or the quartet working as Baiana have no trouble both finding and satisfying an audience but should they choose to pursue the alliance there will almost certainly be many SRO gigs to come.

Brian Morton - 09 October 2020
This couldn’t have been a moment longer and preserved its fragile beauty. If 25 minutes sounds like short commons, it’s pretty much perfect and would that a few more...

Jazz Journal - 31 March 2019
Most of the music to be heard in the first of these albums is reasonably conventional and features excellent tenor from Yusef, in the Hawkins manner. Not such a...