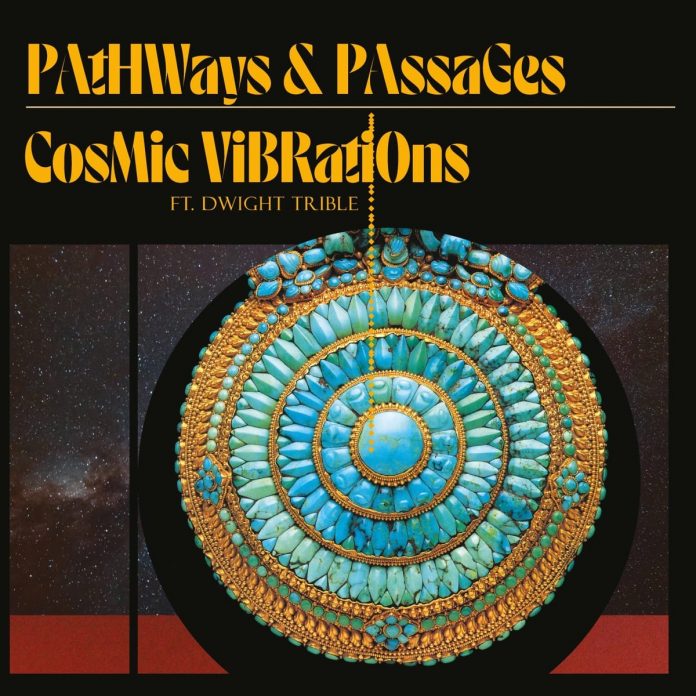 The six-piece Cosmic Vibrations have been gathered together by in-demand vocalist Dwight Trible. The band has been performing steadily over the last three years, building a reputation in Los Angeles and further afield for its mesmerising performances. Pathways & Passages is the first time that their transcendental, spiritual music has been recorded and released.

The result is a genre-defying amalgamation of divine vocals, soul-stirring jazz and healing poetry, delivered with a rich tapestry of African, Mesoamerican and indigenous North American percussion and instrumentation. Improvisation forms the core of this record, but rhythm and groove are never absent.

The poetry-led Nature’s Vision sets the tone with its heavy percussive kick and urgent saxophone, while Blues Skies and Movin’ On are much lighter, their airy flute passages contrasting with Trible’s impassioned singing. Occasionally the singing is overwrought, as on the old spiritual Motherless Child, apparently a live favourite of Trible’s, but he is perfectly pitched and commanding on the slow, devotional May The Weak Become Strong and quietly impressive on the concluding ballad Some Other Time.

Throughout, Trible’s vocals dominate, but the real strength of this set actually comes from the three percussionists, who produce interweaving lines of frothing intensity, the bass and other instruments weaving around them. The flutes, too, deliver an interestingly ethereal tone. It all makes for a heady brew, and a fascinating one, too.

Valentina Addis - 11 July 2021
Caminando, meaning "walking", doesn't summarise the actual effect of this album. Rather, dancing, jumping and hip-shaking seem a better response as one is transported to the streets of Columbia...