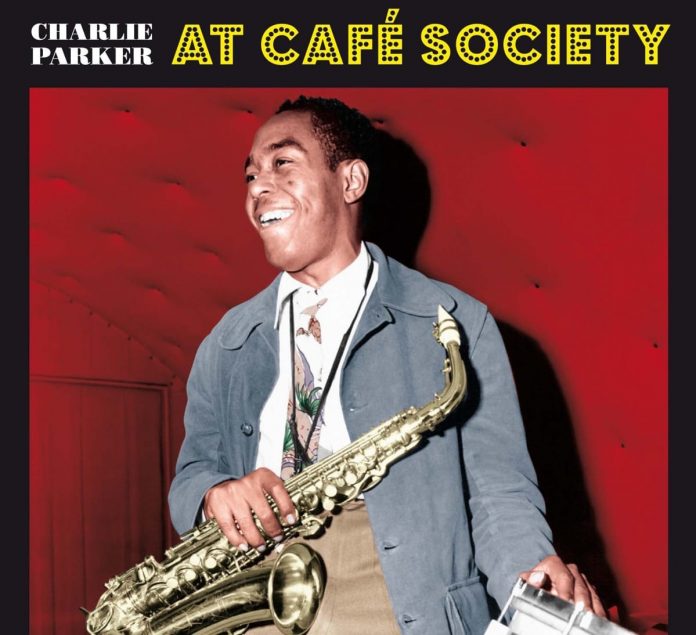 This release is a copy of an amateur tape recording that was made in the New York club, Café Society. It’s been copied by various labels over the years. The club opened in Greenwich Village in 1938 and later became known as Café Society Downtown.

In the club’s final year before it closed in 1950, Charlie Parker’s quintet was engaged to play from 8 June to 5 July. But judging from this privately made recording of some of those sets, nobody will ever know what the band really sounded like. Parker is accompanied by Kenny Dorham on trumpet (some discographies say it was Red Rodney), Al Haig piano, Tommy Potter bass and Roy Haynes on drums, however the audience weren’t listening. From the muffled din and distorted mirth that distracts from much of the proceedings they’re clearly having their own party. If truth be told the band don’t get it together either – maybe they picked up the clientele’s lack of interest during their performances.

Parker doesn’t play his customary set of live numbers, such as Hot House, Cool Blues or Ornithology. Instead we have mid-tempo songs and 52nd Street with which he opens and closes each set. It’s recorded six times. The blurred recordings include the only known Parker version of Bewitched (which is incomplete) and a brief snatch of Gone With The Wind.

The album’s last three numbers were recorded (again privately) in March of the same year when a different quintet line-up was augmented by Tony Scott on clarinet, Brew Moore tenor sax and Mundell Low guitar. Parker doesn’t play on the last track, Lullaby In Rhythm, which is presented as a bonus.

The digipack housing the CD is pleasing and the enclosed leaflet is quite informative but the sound quality of all the tracks on this album is exceedingly poor if not unlistenable. It seems odd, in the case of a musician revered by so many, to say the recording hurt my ears so much I had to keep switching it off. The album sleeve warns that the music comes from non-professional tapes, that it’s technical sound quality is not up to today’s standards and that every effort has been made to improve it through advanced restoration technologies. Even so, while there might be some interest from a historical perspective shown by some zealous Parker collectors out there, the content is hugely disappointing.

Derek Ansell - 14 October 2019
Four sturdy Sarah sessions here, originally from different labels and squeezed neatly on to two CDs. The session with Clifford Brown dates from 1954 and finds the singer in...