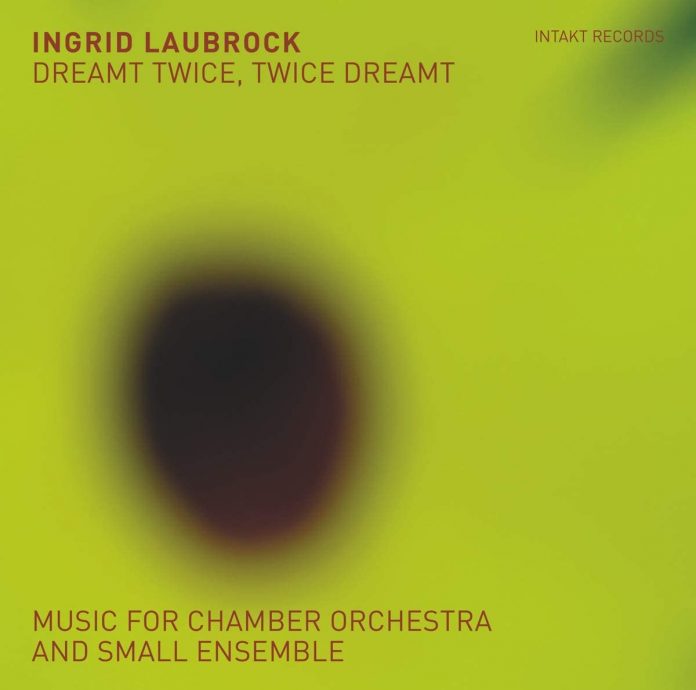 Ingrid Laubrock’s Dreamt Twice, Twice Dreamt is inspired by the dreams she has been documenting for the past decade in a “dream diary”. For this double album, Laubrock read diary entries of hers and made an “attempt to re-enter the dream to compose from that state of mind”. She writes about a sense of liberation in using dreams as her stimuli since unexpected shifts are so common in dreams, and so she had to free herself from the limitations of conventional form.

This is certainly reflected in the virtuosity throughout the album. The first half of the album was recorded by the EOS Chamber Orchestra, comprising 24 people, followed by an almost mirror repeat yet this time with the Ingrid Laubrock Small Ensemble of only six people. Laubrock states that the small ensemble compositions came first; however, the versions for the orchestra were not simply rearranged “but rather re-imagined”.

Virtuosic plays persists throughout this album: Cory Smythe’s piano flexibility most notably in the first half of the second track, Snorkel Cows. Interestingly, a short fragment in the original smaller version of Snorkel Cows transforms into a long vamp in the orchestral version where the ascending piano line becomes a dense woodwind, brass, and string glissando.

Laubrock’s album contains not only textural intrigues but tonal and rhythmic ones too. Down The Mountain, Down The Mountain juxtaposes microtones and pitches in 12-tone equal temperament. Not only this, Laubrock calls for three conductors to conduct various sections of the orchestra at independent tempos.

Dreamt Twice, Twice Dreamt is an exploratory album in terms of textures, tonality, instrumentation and sounds (both electronic and not). Laubrock conveys the unusual and whacky qualities of dreams throughout her music and she reflects on this in relation to things taking place around the world at the moment, saying that it is all “just as bizarre as dreams, but without the fail-safe of simply being able to wake up.”

Leon Nock - 13 February 2020
There is some fascinating jazz stuff here, not least in the personnel. Fans of early jazz, for example, will be pleased to see Changes, by the Paul Whiteman orchestra,...