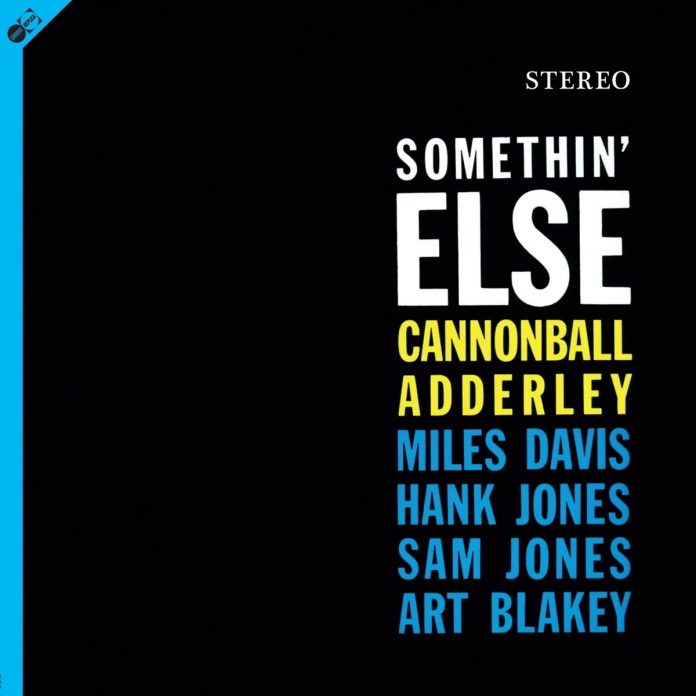 Cannonball Adderley joined Miles Davis in October 1957 for a two-year stay, during which the Davis group made some memorable and famous albums, starting with Milestones the following February. This session for Blue Note, in March of 1958, saw Davis as a sideman, although his presence is felt throughout, right from the start.

Using a muted horn on Autumn Leaves and Love For Sale, Davis invokes the spirit of intimacy and introspection heard on his Ascenseur Pour L’echafaud (Lift To The Scaffold) recorded a few months before. This serves as an effective foil to Adderley’s blues-tinged but joyous alto, which glides up and down, blending perfectly with the trumpeter’s sound, Davis’s poise contrasting with the rapid, quick-fire delivery of Adderley.

The alto stabs and forces on the slow blues One For Daddy-O, Davis on open trumpet, as he is on the more upbeat title track, on which the call and response of the horns at the start is mirrored in the closing stages, horns with Jones’ piano. Adderley is the lone voice on a slow-tempo version of Dancing In The Dark, showing what a beautifully lyrical ballad player he could be.

The rhythm section is, as you’d expect from this line up, top class – assured and with obvious rapport, no doubt down to their shared history. Blakey and Jones work particularly well together, creating the Latin-influenced feel of Love For Sale.

Hank Jones’ composition, Allison’s Uncle, is an extra track, not on the original LP but discovered in the Blue Note vaults in 1982 and subsequently issued in Japan and on CD as Bangoon. It is brightly propelled by the rhythm section, and gives Blakey a brief opportunity to flex his muscles.

The label, Groove Replica, advertises itself as producing high quality 180g vinyl records, and the sound is good and clear. The cover is a reproduction of the original Blue Note one, but with the unnecessary addition of a blue advertising stripe down it. As if this music needs gimmicky design extras – what comes over most of all is the quality of the playing; top musicians at the peak of their powers.

The LP also includes a bonus CD which incorporates Sophisticated Swing, the Emarcy album recorded by Adderley in 1957, although not quite in its entirety – Stella By Starlight is missing (a trio, without the Adderleys).