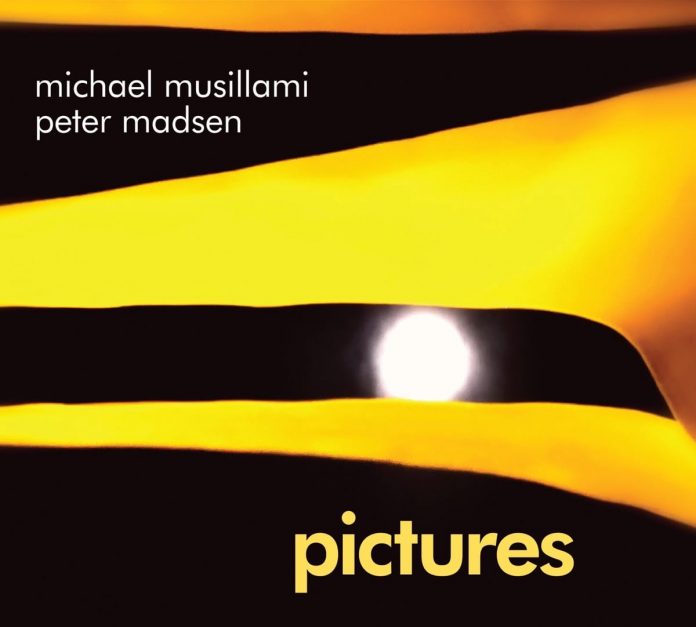 Best known for his longstanding trio with Joe Fonda and George Schuller, guitarist Michael Musillami is an endlessly inventive and inspiring player. After relocating to the East Coast in the early 1980s he started out in the organ trios of “Groove” Holmes and Bobby Buster. Settling in Connecticut at the end of the decade, Musillami made some career-defining connections with collaborators including Mario Pavone and the late Thomas Chapin, becoming part of the renowned Waterbury scene.

A desire to take control of his recorded output led Musillami to found the artist-led Playscape Recordings in 1999. Pianist Peter Madsen has been part of the label’s inner-circle since the beginning, and standing proud in his hundred-title discography is a magnificently titled 2002 duo with Musillami Part Pitbull. Although the pair have worked together many times since (Musillami’s Dachau and Fragile Forms are particularly good), Pictures is this highly empathetic duo’s first studio reunion.

Conceptually it takes its inspiration from Mussorgsky’s 1874 Pictures At An Exhibition, a suite of 10 musical depictions of paintings by Viktor Hartmann which the composer interleaved with a series of linking “promenades”. A quick glance at the track list will make it obvious Musillami and Madsen’s exhibition is a celebration of some of their favourite guitarists and pianists, and each piece reveals just enough of the subject’s musical traits to reach the kernel.

Picking favourite tracks from such a uniformly strong set seems a little wrong, but the dark ruminating undercurrents and piercing clusters of Cecil Taylor elicit some of the duo’s most rapid-fire interactions. The warmth of Jim Hall is captured in what appears to be a suitably elliptical variation on his composition Careful, while John Abercrombie brings the stormier facets of the late guitarist’s music into vivid life. Thelonious Monk and Carla Bley are both suitably complex and witty, while the vibrant African harmonies and chord play of Randy Weston lingered long in the memory.

All told this is a wonderfully celebratory hour, laced with affection and spiked with dangerous curveballs. It’s about as far away from the world of caricature and pastiche as it is possible to be, each and every piece watermarked with Madsen and Musillami’s customary intelligence and flair.

What more is there still to say about this magnificent music, given the fact that in November 2015, July 2019, and again in September...

The first time I heard the name Dick Bank must have been around 1992, and it came about in a somewhat peculiar way. I...

This book is indispensible to Miles Davis collectors and to anyone with an interest in the trumpeter. It is cheaply priced for such a significant...

Back in the mid-eighties, when John Scofield and Allan Holdsworth still seemed well ahead of their imitators, the emergence of Scott Henderson (marked by...