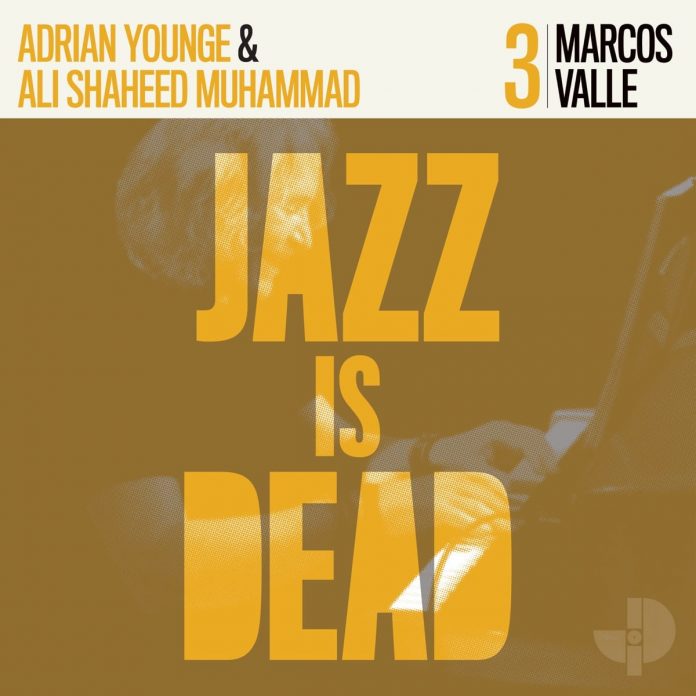 The title – Jazz Is Dead – is clearly meant to be provocative as well as ironic: the very existence of these albums proves that jazz is definitely not dead. Nor to paraphrase Frank Zappa, does it even smell funny.

Marcos Valle is not a household name in the UK. A recent album with Stacey Kent (Ao Vivo) brought him to the attention of the many Kent fans, and she and her husband (saxophonist Jim Tomlinson) have performed and recorded with Valle prior to this. In Brazil, however, Valle is something of an institution. He works in a number of genres but is best known for bossa nova and samba.

His debut album Samba Demais was released in 1964, followed by O Compositor E O Cantor in 1965, which included the still popular So Nice (Summer Samba). Valle then moved to America to work with Sergio Mendes as bossa nova really began to take off there. He returned to Brazil in the late 60s and began exhibiting a political consciousness as well as experimenting with other styles of music including rock, soul and pop. Garra (1971) is still widely acknowledged by critics as a pop classic of its era.

The military dictatorship in Brazil at that time would censor music they found unacceptable and Valle and his songwriting partner and brother (Paulo Sergio) had to work hard to disguise protest songs within the bossa nova rhythms. Eventually, dislike of the military dictatorship saw Valle return to Los Angeles where he became established as a successful songwriter working with artists such as Sarah Vaughan and Chicago. In line with the times, he moved into dance and boogie music in the 1980s with some success. Whilst he still toured and wrote material for artists such as Ricky Martin, his relevance in his homeland was waning. However, a new interest in Brazilian music in Europe saw Valle’s earlier material being rediscovered and his popularity in other countries increase. This was the catalyst for Valle to release new bossa nova material but with a more contemporary feel.

Valle has never been slow to adapt or experiment whilst remaining true to his roots. Nor is he afraid to collaborate with modern musicians and producers. Hence the release of JiD003. Despite his longstanding connection with America, this is the first music he has recorded there for nearly 50 years.

The music is unmistakably Brazilian but refreshingly contemporary. Valle has a uniquely percussive and melodic style of singing which works well with the slick synthesized production contributed by Younge and Muhammed. Older musicians have not always responded well to the challenge of younger producers; but Valle is certainly up for this one. This is not a mainstream jazz album by any definition, but because of its spontaneity and improvisation it is said to be the closest thing to jazz that Valle has recorded. Valle provides vocals on seven of the eight tracks with his wife, Patricia Alvi, dueting with him on Viajando Po Ai (“Travelling Around”). Loren Oden from The Midnight Hour also joins Valle on Gotta Love Again.

As with much of the Jazz Is Dead series, Younge and Muhammed started by going back over back catalogues for direction and inspiration. Não Saia Da Praça (“Don’t Leave the Square”) is heavily influenced by Valle’s 1970’s album Garra, whilst Our Train and A Gente Volta Amanhã (“The People Return Tomorrow”) refer to Valle’s 1973 collaboration with the Brazilian jazz-funk trio Azymuth.

The end result is a slick, contemporary album with a distinctly Brazilian flavour. This album just oozes warm sun, sea and beaches. As we approach winter in the UK and the risk of another lockdown, this may be the next best thing to a holiday abroad you are going to see all year. Highly recommended. My only criticism is that it should have been longer.

Elliot Marlow-Stevens - 27 May 2020
Vibraphonist Warren Wolf’s Reincarnation is his fourth leader album on the Mack Avenue label. His first, self-titled album was released in 2011 and the MA sessions have so far...