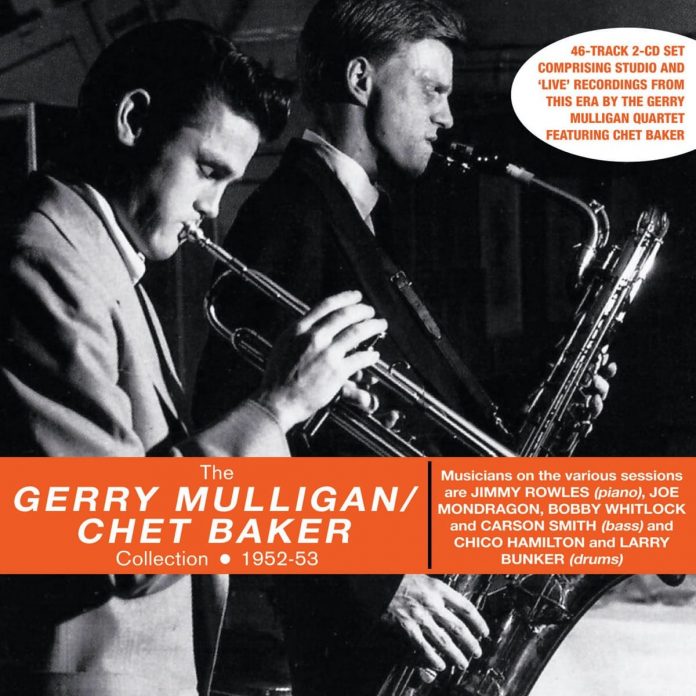 In 1951 Gerry Mulligan began experimenting in New York with a pianoless quartet featuring trumpeters such as Don Joseph, Jerry Lloyd or Don Ferrara. Peter Ind and Al Levitt were usually his rhythm section of choice but due to lack of work in the city Mulligan and his girlfriend Gail Madden eventually decided to leave for the west coast. Without the means to drive, fly or catch a train they hitched their way across America and his Walkin’ Shoes is a reference to their mode of travel.

Gail was quite influential because she recruited Bob Whitlock who later was awarded a Fulbright grant to study with Pierre Boulez in Paris. She also recommended Chico Hamilton after she heard him with Charlie Barnet at the Streets of Paris in Los Angeles. Chico was a consummate brush artist and Gerry was to say a little later that he considered him to be the ideal drummer for the quartet.

It was Whitlock who introduced his friend, the precociously talented Chet Baker, to Mulligan. He quickly became an integral voice in the rich tapestry of contrapuntal interplay created by the leader, who was a master in the art of constructing spontaneous arrangements that had form and structure. With the quartet now in place he began a residency at the Haig on Wilshire Boulevard.

The material on this CD is constantly reissued although Chet Baker is not usually given equal billing. Mulligan’s shrewd choice of titles for some of his originals helped ensure local radio station air-time. Line For Lyons for instance was dedicated to San Francisco disk-jockey Jimmy Lyons and Bark For Barksdale was written for Oakland Bay presenter Don Barksdale. Titles like Nights At The Turntable probably helped keep the group’s recordings on the airwaves too.

In 1952 the quartet rescued Funny Valentine and Bernie’s Tune from almost total obscurity. The Rodgers & Hart standard was an overlooked gem from the 1937 show Babes In Arms. Carson Smith suggested it to Mulligan and the following year Frank Sinatra gave it his seal of approval on his Songs For Young Lovers album. Tom Lord’s Jazz Discography currently lists over 1600 versions. The provenance of Bernie’s Tune is even more unusual. Written by Washington D.C. pianist Bernie Miller it was first recorded by Boyd Raeburn’s band under the title Bobby Socks in 1944. Serge Chaloff was in the sax section on what was his first recording date. It was to become a jam-session favourite with over 300 versions listed on Lord’s site.

During the quartet’s 11-month residency at the Haig, Lee Konitz, Joe Maini, Stan Getz, Miles Davis and Oscar Pettiford (on cello) all sat in occasionally.

The Ed Palermo Big Band: I’ve Got News For You – The Music Of Edgar Winter

Mark Kavuma is one of the key trumpet players on the British jazz scene at the moment, his current Banger Factory band honed during...

I’ll never forget the early occasions when I saw McCoy Tyner in concert. The first time was at Ronnie Scott’s in London, where I...

John White's instructive tour through Philip Larkin's writing on Louis Armstrong got me thinking. I can well understand Larkin's ire when, in James Lincoln...

Another winsome offering from the genteel ECM stable, this time one bent strongly on the yoke of Gary Burton, especially since the nearest it...

"Baker quickly became an integral voice in the rich tapestry of contrapuntal interplay created by the leader, who was a master in the art of constructing spontaneous arrangements that had form and structure"Gordon JackGerry Mulligan/Chet Baker: Collection 1952-53
Advertisement