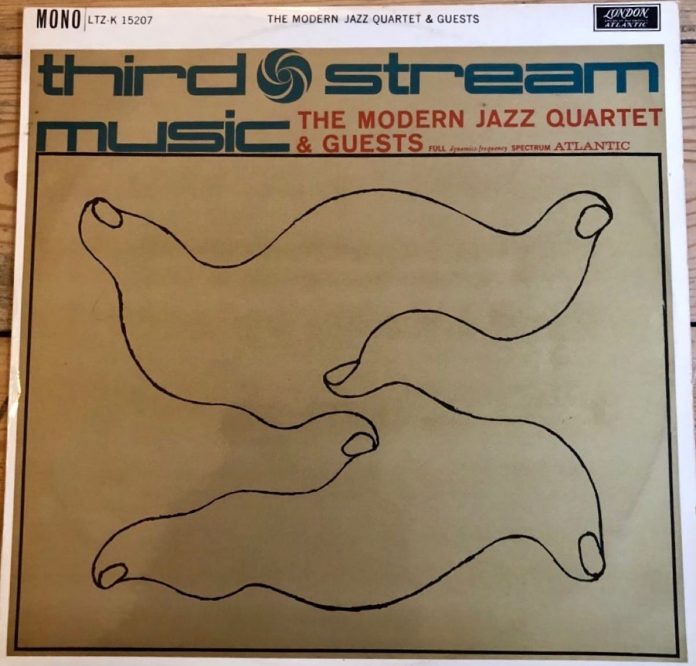 First I must admit that I have not listened carefully to the MJQ since Kenny Clarke left. Second I must confess that I fell asleep at one of the MJQ con­certs last time round.

Third Stream Music, we are told, is neither jazz nor classical “but draws upon the techniques of both.” Would that this were true! John Lewis would be playing like Serkin and Horowitz would be phrasing like Horace Silver – a delightful expectation.

Well, it doesn’t happen on this record, though it is devoutly to be wished that it may happen soon, somewhere. What does happen here is that, for example, in Gunther Schuller’s interesting “Con­versation,” the Beaux Arts String Quartet fiddles away fascinatingly for a brief spell, then Bags plays briefly, then the fiddlers saw away at the catgut, then Lewis makes a measured oration, then the strings crash in, then Connie Kay tinkles, then I fall asleep – again.

There is little connection between these moving parts beyond brief moments of bewildered collision.

John Lewis’s “Sketch” is just that. It fails depressingly to advance in any way Lewis’s tired linear conceptions. Jimmy Giuffre’s “Fine” is in his well-worn, woodsy, folkloresque groove which I wish he would hurry up and clamber out of. Lewis’s “Da Capo” is the mixture as before, which is to say that it is the musical equivalent of sleeping-pills with the added and horrible thought that what it could well induce is boredom, not soothing sleep.

The crime: That a number of bril­liant musicians and thinking composers have hidden their failure to create a new form behind the slick claim that they have, instead, succeeded. The mitigating circumstance: It isn’t going to be easy to create a new form. The victim: You, if I have failed to dissuade you from purchasing this record. The verdict: pre­tentiousness personified.

Brian Payne - 08 July 2020
Danish multi-instrumentalist Sarah Elgetti has been fronting her quartet for 13 years. Prior to Dawn Comes Quietly she released two quintet albums - Synchronize (2015) and Into The Open...