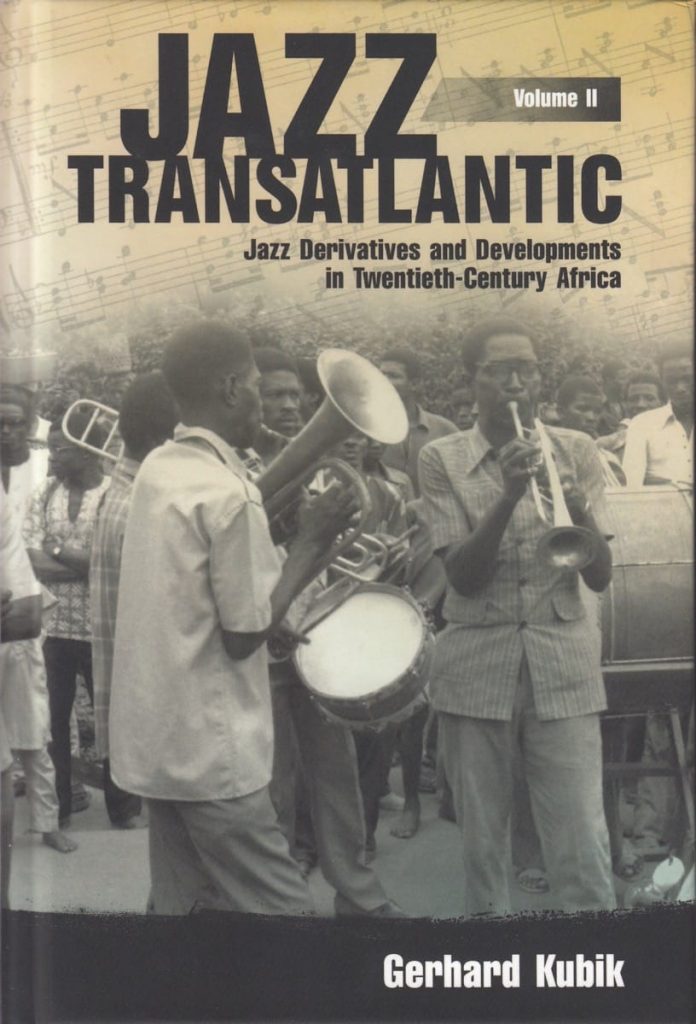 Gerhard Kubik’s magisterial, groundbreaking study comprises two simultaneously published volumes, the product of nearly 60 years’ fieldwork by this doyen of ethnomusicology. Volume I, already reviewed, focuses on African influences on ragtime, blues, and jazz. Vol. II explores the influence of jazz on its “return trip” to Africa, especially after WW2 and decolonization. As with Volume I, individual chapters function relatively independently.

The first chapter offers an overview of modern jazz in Africa. Kubik argues that in most of the continent, jazz influence declined after the 1980s. There was a jazz scene in Harare into the 1990s while in Dakar, from the 40s to the 60s, jazz was “a symbol of a desired, diasporic identity for urban, educated Senegalese” (p. 49). Mulatu Astatke’s “Ethio-jazz” was internationally popular, but probably not part of any local scene. Today, local popular musics still appropriate the word “jazz” for cachet, but now it denotes “any current popular music”: “From the late 1990s, reggae and hip hop occupied most the terrain of media-sponsored music in Africa” (p. 22).

Kubik’s concern, he argues, is with jazz in a traditional sense, which is not a popular music. He nonetheless finds jazz roots in several forms of popular music, especially in South Africa – describing a convergence between American jazz and African popular musics. This vital concept contrasts with diffusion – the process by which African musicians were influenced by American jazz, for instance: “In cultural anthropology, convergence … describes a (possible) result of multiple invention and parallel development”. He cites Hirschberg’s definition – “the process by which similar phenomena may emerge in different cultures, and the results of it, without mutual influence between them” (p. 7). He describes how South African musicians adopted blues tonality easily, unlike Congolese musicians: “Blue notes are abundant, not only in South African jazz but also in…mbaqanga and other South African genres” (p. 8). Kubik finds parallels between modern jazz forms and elements of traditional musics in Africa, both intentional and non-intentional: “‘Cross-cousins’ of early jazz arose from analogous stimuli” (p. 63). Around 1900, as Africans and African-Americans encountered “fashionable European-derived musical forms”, there were deep structures in common in their responses.

The second chapter discusses brass-band culture in African cities which, as a result of colonialism, created enduring similarities with New Orleans jazz. Kubik documents the introduction of Western instruments in military bands, and looks at big band and other jazz-influenced music in Africa. Bands met the demand for Western-style dancing, imparting to it a local flavour. Kubik argues that rural African fife-and-drum bands, often mistaken for ancient “folk” music, arose from colonial militarism and have American parallels. Another parallel to New Orleans jazz is the pre-jazz “spasm” band – children playing cheap, often homemade instruments, and developing their ensemble improvisation skills. From the 1940s to the present, these similarities persist. Kubik cites the Gold Coast Police Band, which toured England in 1947 – you can see a video by the Colonial Film Unit. Kwela, internationally popular in the late 1950s, is another result. The term “high life” was coined in the 1920s, but the music of that name really developed in Ghana and Nigeria from independence in the 1957 and 1960s, inspiring jazz fusions.

The next three chapters offer one of the most condensed and insightful accounts of South African jazz in the literature – the book is worth purchasing for them alone. Jazz has had an important political role, as a subversive response to apartheid. For Kubik, it constituted “a declaration of defiance by an educated musical avant-garde confronted with an unacceptable social system” (p. 137). Jazz has been intensively present in South Africa, particularly from the 1960s to the 1990s, though as Kubik comments, “Even there one would not claim that jazz was part of a popular, mass-dominated musical culture, though on some occasions a stadium in Johannesburg was easily filled” (p. 4). South Africa’s popular music was jive, patha-patha, kwela, and so on. Kubik admits that popularity is no criterion of historical importance – and how many people have heard of Webern or Derek Bailey? But from my own more limited experience, in particular visiting Grahamstown Jazz Festival over several years, there is a township audience for authentic jazz – in South Africa, jazz still has a popularity that it hasn’t had anywhere, perhaps since America in the 1960s.

To reiterate, as Kubik argues, “the blues tonal system was not perceived as alien in the townships” (p. 157). Chris Ballantine explains in his essential text Marabi Nights how marabi is the blues of South Africa – an urban dance music of the 20s and 30s onwards, and precursor of South African jazz. According to Julian Beinart, writing in 1962, jazz exploded on the scene in 1959, when the Jazz Epistles were formed. The latter included Abdullah Ibrahim and Kippie Moeketsi, who became two of the internationally recognised stars of South African jazz, along with Hugh Masekela, Miriam Makeba, Chris McGregor and Dudu Pukwana. Kubik also discusses a second strand of jazz, township jive or mbaqanga – “the dominant musical expression in the …townships from the mid-1960s to the present” (p. 144), that also included kwela.

I described Volume I as is a towering contribution to the jazz literature – forcing the reconsideration of ideas central to jazz, both rhythmic and harmonic, including swing, and blue notes. Its successor is a rather shorter volume with – I’d argue – a less ambitious remit, and less coherence. Because it’s primarily about music in Africa rather than the United States, jazz readers may find it of less interest – especially given its scholarly approach. Nonetheless it is readable, compelling and full of insight – if you enjoyed Volume I, you’ll also find Volume II very rewarding.

Brian Payne - 18 January 2020
British pianist and composer Bill Laurance is a regular member of the Brooklyn-based jazz fusion collective, Snarky Puppy. He’s recorded several albums with them and released four of his...