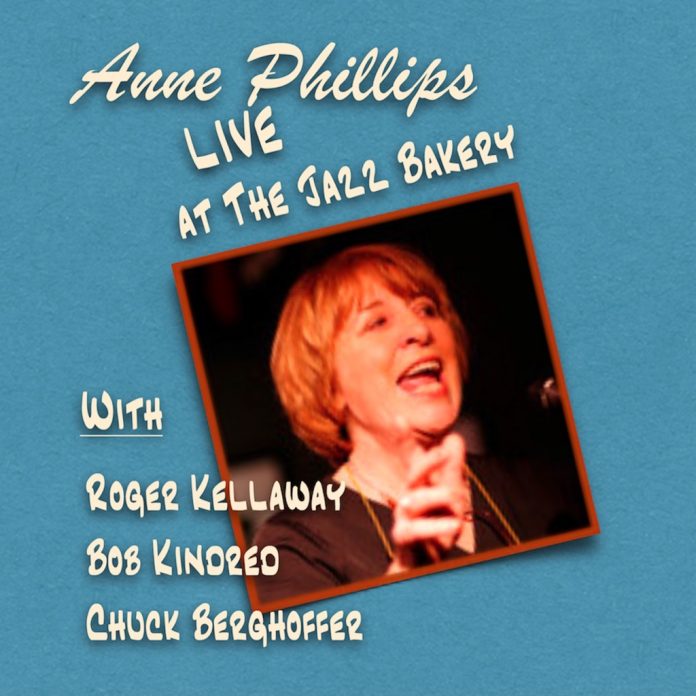 Working extensively in New York City from around 1954, this fine artist performed first in clubs, restaurants and bars as a pianist-singer. She also made demos for songwriters, was a backing singer, a member of the Ray Charles Singers, and then, in 1959, made her first album, Born To Be Blue (recently reissued in a Fresh Sound package) This was well-received, but she continued to work out of the spotlight as a backing singer, arranger, composer and producer, mainly for commercials.

In the 1960s with The Anne Phillips Singers she recorded Noel Noel, which promptly vanished until its re-release in 2002. Her second album under her own name, Gonna Lay My Heart On The Line, did not come until 2000. There is also Ballet Time, released in 2007, on which Phillips is in the company of pianists Dave Brubeck, Dave Frishberg and Marian McPartland.

She’s married to saxophonist Bob Kindred and in addition to performing music they are co-founders of Kindred Spirits, a not-for-profit organisation that teaches choral music to inner-city children. Her compositions include Bending Towards The Light: A Jazz Nativity (released on a similarly titled album in 1995), Easter Cantata: Sing, For The Lord Has Risen, and a 10-minute opera, Tempo Fuori del Tempo.

On the album under review, Phillips sings an interesting selection of songs, her voice rich and fluid. Of the 11 songs listed below, seven are Phillips’ own compositions (one of them in collaboration with P. Brody). In addition to the listed songs, there are five tracks with Phillips talking to the audience about her career and also singing excerpts from other songs, including Saturday Night Is The Loneliest Night Of The Week. The album thus becomes a kind of “evening with” and through these autobiographical inserts a fascinating insight is gained into the life of a little-known yet excellent singer who has contributed much to the world of music.

Her collaborators on this set are ideal, Kellaway and Berghofer being masters of the art of accompanying singers, while Kindred’s backing and solos enhance the session. In particular, Embracable You is effectively a duet by singer and saxophonist. Phillips has had a very successful multi-faceted career and for those who like good songs well sung it is sad that she made so few albums. This is a very good opportunity to fill that gap.

Discography
I’m Gonna Lay My Heart On The Line; Born To Be Blue; Easy Street; Watching You Watching Me; Hey Look Where I Am; New York Night Time Blues; To Make Them Like Me; Another Day Without Him; After All These Years; Embracable You; There Will Never Be Another You (60.27)
Phillips (v); Roger Kellaway (p); Bob Kindred (ts); Chuck Berghofer (b). 2001. Los Angeles.
Conawago Records 1014

Brian Payne - 16 February 2020
American trumpeter and composer Charlie Porter won first place in both classical and jazz divisions of the United States National Trumpet Competition. Downbeat has described him as a technical...