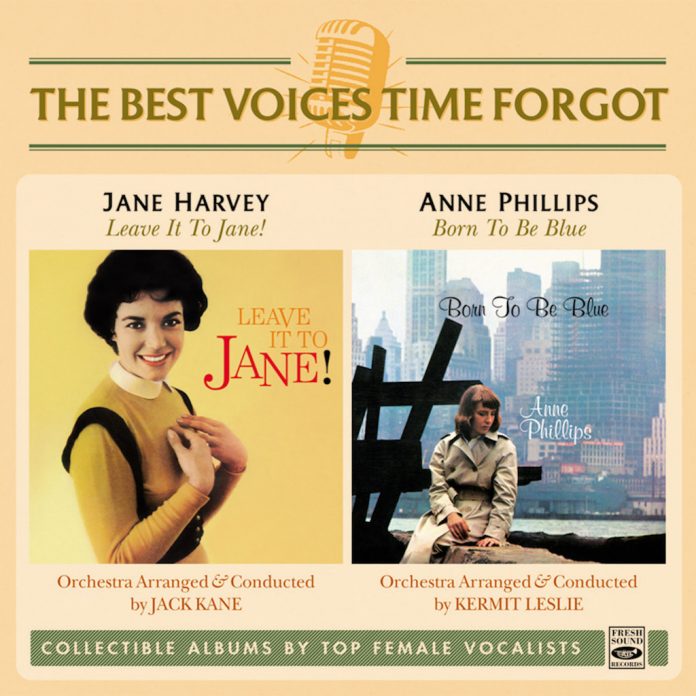 The Best Voices Time Forgot is an interesting series: two albums on each CD, featuring largely forgotten, close-to-jazz female vocalists of the 50s and early 60s. A niche market, I grant you, but worthwhile for all that. This is the seventh in the series, but the first I’ve come across.

The name of Jane Harvey caught my eye. She was the best among the parade of singers who followed Peggy Lee through Benny Goodman’s band in the mid-1940s. Her version of He’s Funny That Way, with the sextet, was quite captivating. A few years later she married Bob Thiele, the record producer, and retired. This album, Leave It To Jane!, dates from her comeback years – 1959 to be exact – and I found it rather disappointing. It opens with three totally unaccompanied choruses of a venerable blues from Jimmy Rushing’s repertoire with the first Basie band. Brave but ill-advised. She was no blues singer, as her eccentric phrasing reveals, and the outcome is merely raucous. The heavy echo doesn’t help, either, and there are too many nondescript songs in the list. Later, in 1974, Ms Harvey made a very good album for British RCA, with the far more suitable accompaniment of a small band featuring John Bunch, Bucky Pizzarelli et al. Here she’s at her best with good, unpretentious ballads, such as Misty, Trav’lin’ Light and the rarely heard Blue Again.

Anne Phillips has the advantage of better repertoire, no echo and a band containing A-list players. She also has the kind of intimate style that trusts the song to convey its meaning without histrionic assistance. From the technical point of view, her intonation and diction are absolutely spot on, and it comes as no surprise to read in the notes that she studied at the New England Constervatory, led her own quartet as a singing pianist and was also a session singer with the Norman Luboff Choir and the Ray Charles Singers (the other Ray Charles, that is – the one who was resident MD for years on the Perry Como Show). All in all, Anne Phillips is a bit of a find, although the album Born To Be Blue was recorded in 1959, so she’ll be in her 80s now, if she’s still with us.

No doubt, if you listened to other singers in this series you’d come across further belated finds. The genre was so well established, audiences and venues were plentiful, the record companies were signing promising newcomers and the general standard was so high that things might have continued like that indefinitely. But, as we know, it all came crashing down in 1964, when the Beatles landed in New York.

Footnote from Anne Phillips: “The reviewer guessed, yes, I am in my 80s. And living in NY. And doing a lot. When the editor of the international Alliance of Women in Music saw my site I said I was ‘a survivor of the music business’. The article she asked me to write became the cover story. You can read it on my site – thanks, Anne”.

Discography
[Jane Harvey, Leave It To Jane!] Sent For You Yesterday; Misty; Everything But You; Impossible;A Lover In The House; Telephonez Moi; Witchcraft; Trav’lin’ Light; The Man That Got Away; Blue Again; Can’t Get Out Of This Mood; [Anne Phillips, Born To Be Blue] Born To Be Blue; Saturday Night Is The Loneliest Night Of The Week; Easy Street; For Heaven’s Sake; It Could Happen To You; You Don’t Know What Love Is; Loneliville; I’ve Got To Pass Your House To Get To Mine; A Stranger In Town; I Don’t Want To Walk Without You; There Will Never Be Another You; When Sunny Gets Blue (66.45)
[Leave It To Jane!] Jane Harvey, with orchestra conducted by Jack Kane. LA, 1959. [Born To Be Blue] Anne Phillips (v); Doc Severinsen (t); Walt Levinsky (as, ts); Bernie Leighton (p); Barry Galbraith/Mundell Lowe (g); George Duvivier/Milt Hinton (b); Osie Johnson (d) + strings. NYC. 1959.
Fresh Sound FSR V107