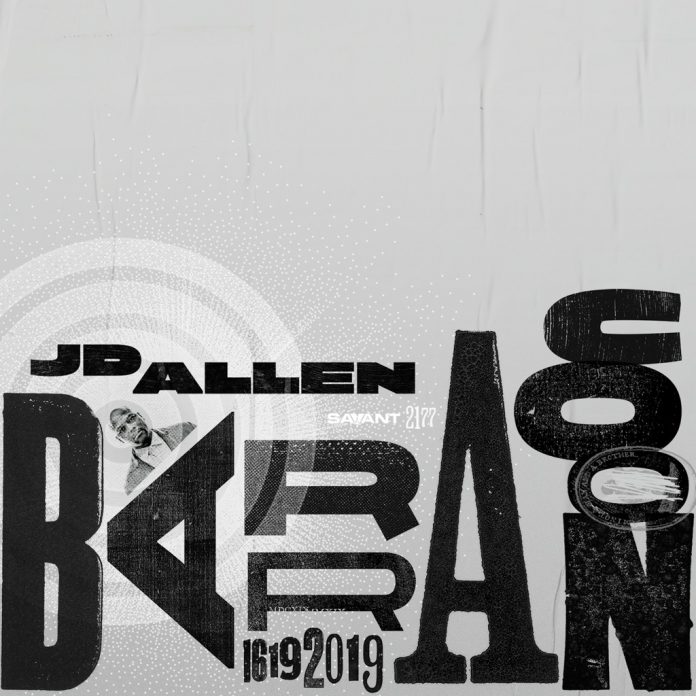 Born in Detroit, now living in New York, JD Allen is an alumnus of Betty Carter’s school, and has worked with such luminaries as Lester Bowie and David Murray. I reviewed his ballad album Love Stone last year, and found it very worthwhile, though not as compelling as his more contemporary work.

As one writer comments, “Allen is a classic player in the styles of Coleman Hawkins, Sonny Rollins, and Ben Webster, [but] never settles on that hallowed ground”. On Love Stone, he hewed to a Dexter Gordon model of slow tempos and a fat sound, though with a hard post-Coltrane edge. On this more contemporary and exciting release, I’m reminded more of Rollins. “Tough tenor” is the common sobriquet, totally justified here.

Barracoon is the tenor-player’s 13th album as a leader. Unlike Love Stone, almost all compositions are his – excepting the concluding When You Wish Upon A Star, and Communion which has some relation to the chords of Confirmation.

In place of long-time partners Greg August and Rudy Royston, his trio features young players that he’s been working with for over a year – bassist Ian Kenselaar and drummer Nic Cacciopo. In an interview, he commented that “I found the bad boys of this generation … guys who are not afraid to dip their toe in the avant-garde a little bit, and then turn around and play the tradition”. Nic Cacciopo is a loud drummer with an unremitting bass drum, but he’s clearly what Allen wants. Kenselaar fills the bass register with abandon, switching to electric bass on Ursa Major and G Sus.

The album was inspired by Barracoon: The Story Of The Last Black Cargo by Zora Neale Hurston. Written in the 1930s, but first published only last year, it’s an oral history of one of the last slaves to survive the Middle Passage before slavery was abolished in the USA. The album also draws on The Immortal Life Of Henrietta Lacks by Rebecca Skloot, which is the inspiration for The Immortal (H.Lacks) – an Ornette Coleman-type bluesy threnody or dirge in free time, that’s a highlight of a very rewarding album.

Michael Tucker - 21 December 2020
Over the past couple of years I've very much enjoyed the fleet-fingered yet thoughtful Fonnesbaek's appearances at the Ystad Sweden Jazz Festival: first in pianist Lars Jansson's contemporary trio...