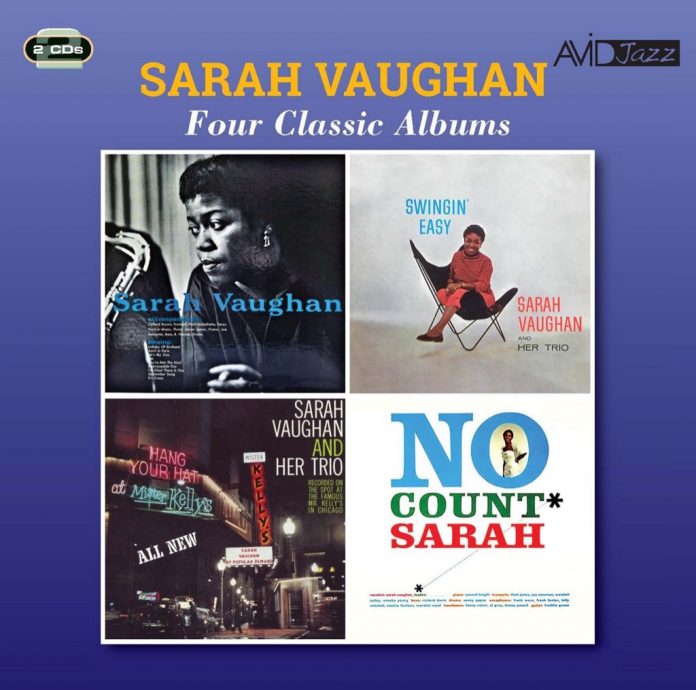 Four sturdy Sarah sessions here, originally from different labels and squeezed neatly on to two CDs. The session with Clifford Brown dates from 1954 and finds the singer in upbeat, swinging and scatting mood with strong contributions from Paul Quinichette on Lester Young infused tenor, Mann on flute and Clifford Brown adding trumpet delicacies. Lullaby Of Birdland has her bouncing along at a brisk pace and then she slows down for an exquisite ballad reading of April In Paris. Jimmy Jones provides delicate single note lines in his solo and Quinichette is rhapsodic on soft-focus tenor before Clifford comes along with some very well-thought-out lines both alone and behind the vocalist. Seven more selections of standards with much the same quality follow, with the vocals and trumpet solos outstanding.

The Swingin’ Easy set is more in the straightahead jazz manner with Sarah kicking off with a scat foray on Shulie A Bop and solos from John Malachi’s piano, Joe Benjamin’s bass and Roy Haynes on drums. Sarah gives a moving jazz-based performance on Lover Man, her voice stretching effectively over the lyrics in her own, incomparable style. She uses her voice like an instrument, improvising on tracks which are again mostly hardy standards. The piano duties are shared by Malachi and her regular, at the time, accompanist Jimmy Jones.

The 1957 live set at Mr. Kelly’s in Chicago is a good example of Ms Vaughan in a nightclub setting with just her regular trio in support. It is a superb trio with Jones on piano, bassist Richard Davis and Haynes back on drums. There’s plenty of atmosphere on this one along with some fine vocals – easy swinging with clearly defined voice on Just One Of Those Things and quietly melodic on Be Anything. The voice is sublime on the slow ballad Stairway To The Stars. On How High The Moon she does an Ella Fitzgerald, claiming to have forgotten the words and it is all scat through to the end of this gig.

Perhaps best of all is the last LP presented, where Sarah exercises her considerable vocal cords on nine tracks backed by the Count Basie Orchestra of the time without its leader. She is on great form on Smoke Gets In Your Eyes as the brass and reeds cushion her smooth as silk vocal. She swings happily along on Horace Silver’s Doodlin’ with a pulsating blues background from the orchestra. Somehow Sarah sounds in her element with this orchestra swinging and punctuating sturdily behind her. Billy Mitchell, Thad Jones and the rhythm section with Richard Davis drafted in on bass are on top form throughout.

For more information or to purchase this title please click here

Peter Gamble - 19 June 2022
This release’s title, Heretic Monk, does aptly describe this trio’s delivery of tunes by, or recorded by the iconoclastic Thelonious Monk. We have become used to countless musicians selecting...