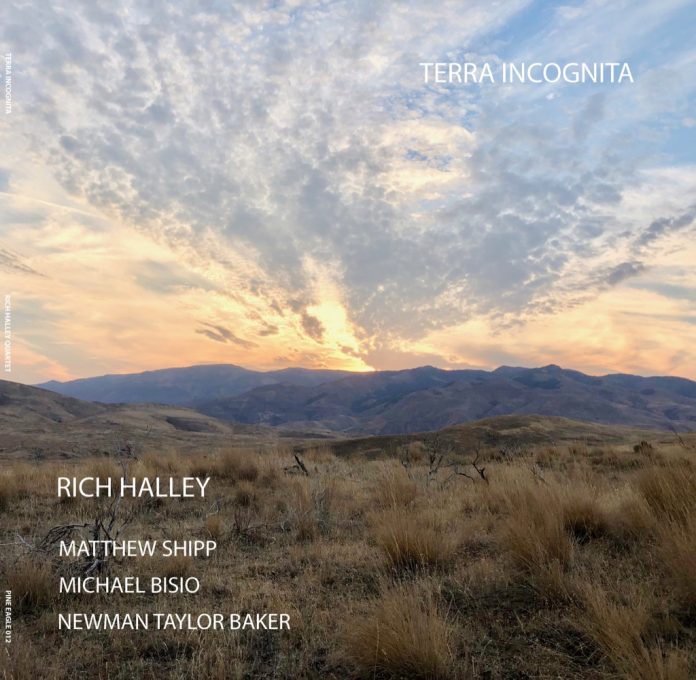 Halley’s music always gives the impression of traversing broad territories. I once called it “heartland jazz” and make no apology for repeating the term, because it catches something of his self-directed philosophy, which owes little to East Coast/West Coast stylistic norms.

This is a guy who served his academic apprenticeship studying rattlesnakes (Requiem For A Pit Viper is one of his titles), not playing The Sidewinder in New York clubs. Increasingly, it’s hard to describe his music in terms other than its own. He has made occasional attempts to close with the repertory, or as he called it in a recent album The Literature, but for the most part he follows his own doughty path.

Much of his more recent work has been in a trio with bassist Clyde Reed and drummer-son Carson Halley, sometimes with guest horns as interesting as trumpeter Jim Knodle, trombonist Michael Vlatkovich and saxophonist Troy Grugett, often working in unusual outdoor settings as a field biologist should.

Now, working with the extraordinary Matthew Ship, bassist Michael Bisio and drummer Newman Taylor Baker, he seems to have taken a further step, exploring a set of themes that allow him to move allusively through much of the small-group jazz of the last few decades.

As a saxophone player who seemed iffy about pianos, he invites comparison with Ornette Coleman, and there is something of that harmonic originality about the work here. Shipp in no way normalises it. The music remains intensely open, especially on the two long opening tracks, which feature some righteous wailing from the leader, but also on the short and in some respects untypical The Elms.

Recording in New York City may well have fired off new associations in his head. This is as much as to say that Terra Incognita is immediately recognisable as Rich Halley, but not entirely typical of his now substantial run of albums. The Journey, from a thoughtful beginning, and with some wonderful contributions from Bisio, seems to sum up a lot of what he’s about and would be an excellent place to start if you have never heard him before. It reminded me of moments on Coyotes In The City from 2001 before Carson was in the band and Dave Storrs was the drummer, or the more recent Crossing The Passes, a personal favourite.

There are now 27 Rich Halley albums out there. What do you mean: you’ve never heard him?

Derek Ansell - 28 June 2019
This LP from a 1964 recording is a strong reminder of just how good the Rendell/Carr quintet of the time was. A programme of blues and blues variations, it...